Global financial markets are again under severe duress this morning as historic levels of volatility translate into more disorderly trading conditions and rapidly rising systemic risks despite the increasingly proactive response from central banks and governments to restore calm. S&P 500 futures are frozen at a 4.8% “limit down” decline at the open, with ETFs suggesting a loss of over 9%. This would retrace Friday’s huge countertrend 9.3% rally that followed Thursday’s plunge of 9.5%, which was the heaviest percentage point decline for the index since “Black Monday” in 1987. Amid these wild swings, the index is down 16.1% on the year, and 19.9% below its mid-February record high, as investors come to grips with the unprecedented ramifications of the pandemic and ponder the ability of government measures to address the multifaceted economic and financial fallout. Equities in Asia posted more moderate losses overnight but risk aversion has re-intensified during EU trading. Treasuries are again reflecting safe-haven demand, with the 10-year yield at 0.76%, while the dollar is dipping below its recent multi-month top. Brent crude is again spiraling below $31 per barrel. 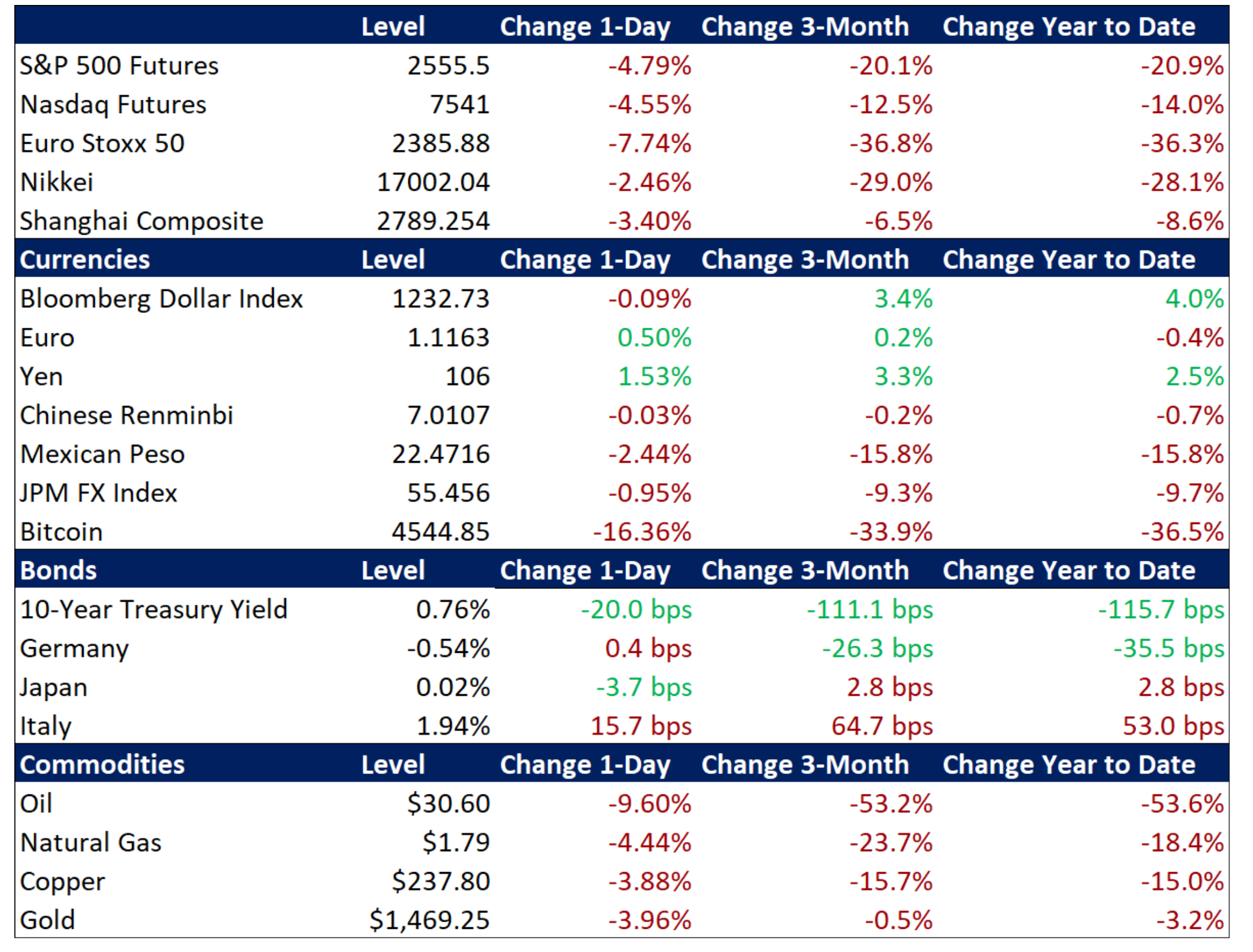 Although the US public health and economic policy response to the pandemic has become increasingly energetic over the past week, price action this morning indicates that the intensifying magnitude of the economic shock from the outbreak and the impact on investor confidence is threatening to overbalance all current policy countermeasures. Disorderly price action overnight has put the spotlight back on the Fed, the Trump administration, and Congress as investors ponder what measures beyond those already enacted might quell the panic. Last week, the halting US policy response through Thursday saw extreme market volatility devolve into panicked and disorderly trading, implicating 2008-like systemic risks (more below). On Friday, the Fed’s enormous liquidity injection of $1.5 trillion into short-term funding markets (with expectations of more to come), and an increasingly focused response from the Trump administration, alongside agreement on a bipartisan spending package, headed off a market seizure and sent risk assets higher to close a challenging week on a positive note. However, sentiment deteriorated over the weekend as investors contemplated a sudden stop of the US and global economy that could last for weeks, if not months, as stricter quarantines and travel restrictions were rolled out across the US, EU, and elsewhere. Last evening, the Fed executed a surprise 100 basis point (bps) rate cut and announced a $700 billion quantitative easing program, alongside other measures to boost dollar liquidity in the US and overseas. With this huge magnitude of monetary accommodation failing to steady market nerves, at least so far, skeptical analysts are pointing to the inability of liquidity measures to address the economic reality that broad swaths of the US economy, businesses and workers alike, will need direct financial support from the government to make it through the coming weeks and months.

Alongside extreme equity market volatility and panicked Treasury trading, significant fundamental strains are appearing in global financial markets, drawing comparisons with the global financial crisis. Analysts have monitoring significant and rising pressure in short-term funding markets (which first emerged in September), overseas dollar liquidity, credit market metrics, and interbank funding. For context, systemic risks, like those that manifested themselves in the global financial crisis in 2008, involve threats to the functionality of markets and availability of liquidity, as opposed to standard market stress, which results in sometimes deeply adverse, but still orderly, price action. The Fed’s actions on Friday and over the weekend appear to be having some positive effects on dollar liquidity overseas, while analysts are monitoring US short-term funding markets to see if Friday’s improvements persist. Credit markets, however, indicate a broad and worsening solvency crisis, particularly in some of the most impacted sectors, like energy, which is suffering further damage from the Saudi versus Russia oil price war. The commercial paper (CP) market is also experiencing stress, with some analysts suggesting that the Fed should begin to directly purchase CP in an effort to unfreeze this key source of corporate funding. EU financials, a perennial weak link in the global systemic risk chain, are also evidencing increasing credit pressure, as the cost to insure against default of European subordinated bank debt reaches levels last seen in 2012.

Economists Forecast US Recession – Goldman Sachs has joined other economists in forecasting stagnant growth in the first quarter (1Q) and a steep contraction in 2Q.