China risks remain front and center while uncertainty around US infrastructure and debt ceiling move up to the second spot. Uneven economic data and rising oil prices along with inflation risks round out the top five spots. 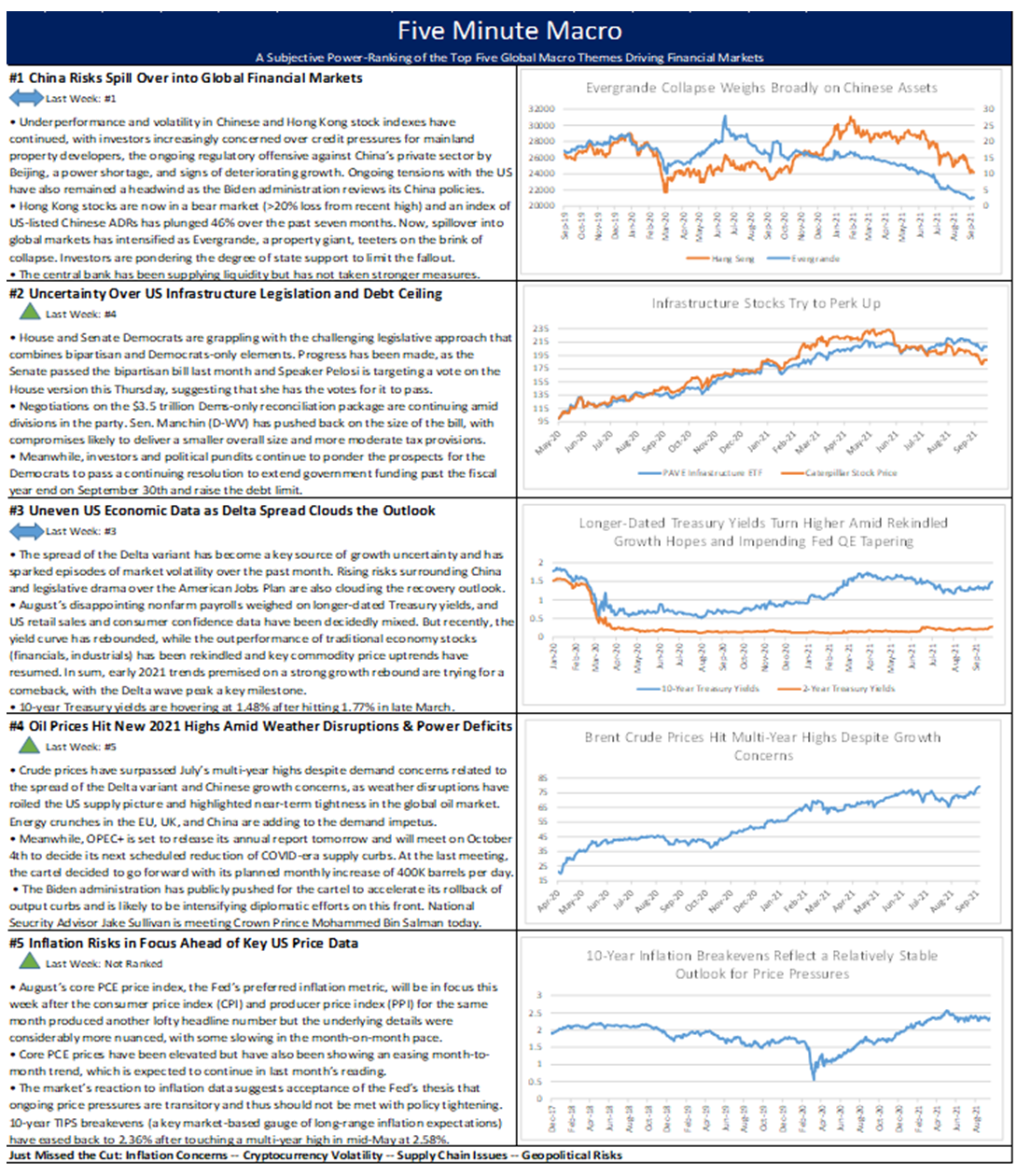 In this week’s Five Minute Macro, China’s real estate crisis is spilling over into global financial markets. The Fed meets on Wednesday where the focus will be on any guidance for the taper of their balance sheet. Delta keeps growth uneven, while infrastructure negotiations continue and finally, oil prices near highs. 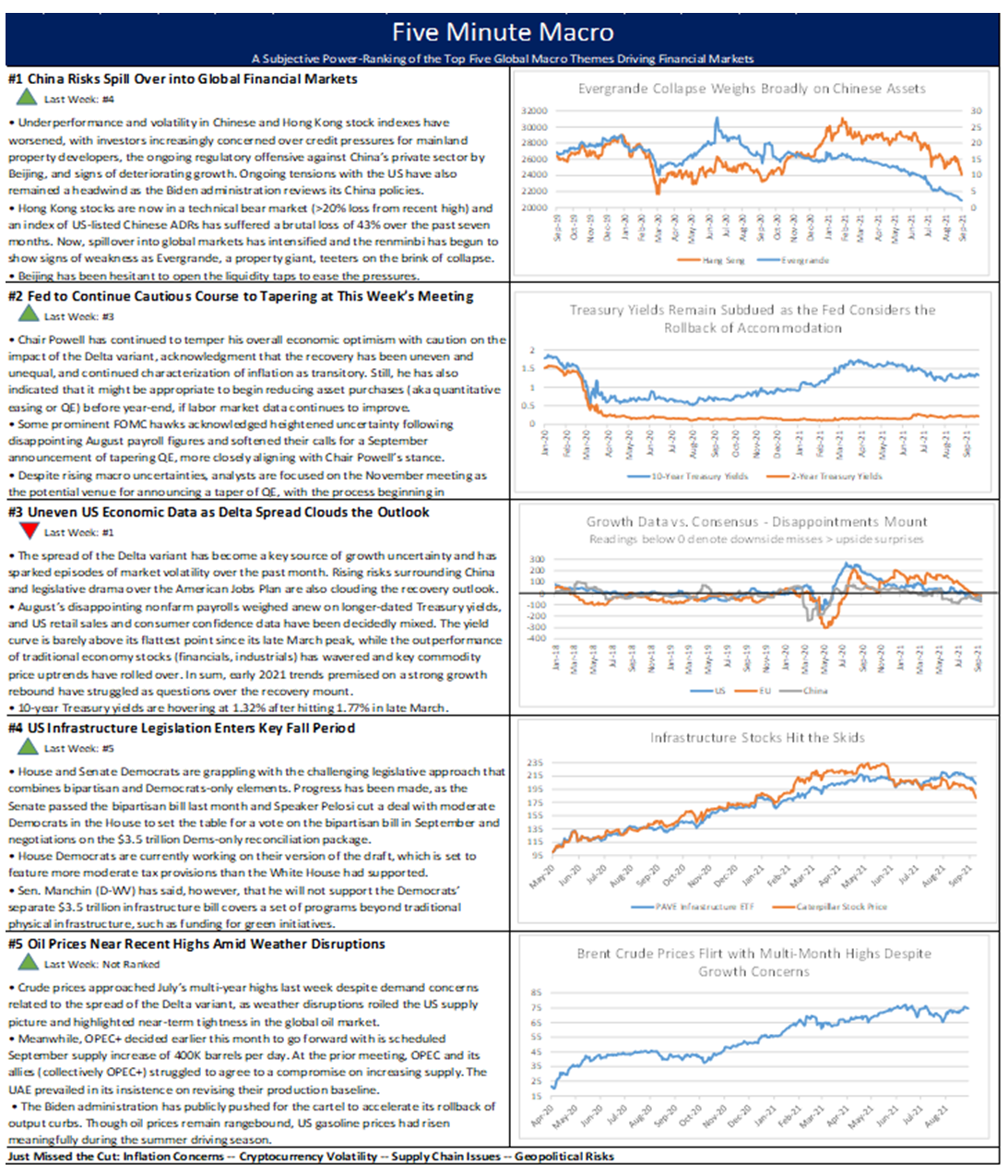 In this week’s Five Minute Macro, the Fed meeting provides more clarity on taper decisions while the market continues to struggle with Delta fears. The Senate worked through the weekend to finish the infrastructure bill, while risks in China remain elevated and earnings season continues. 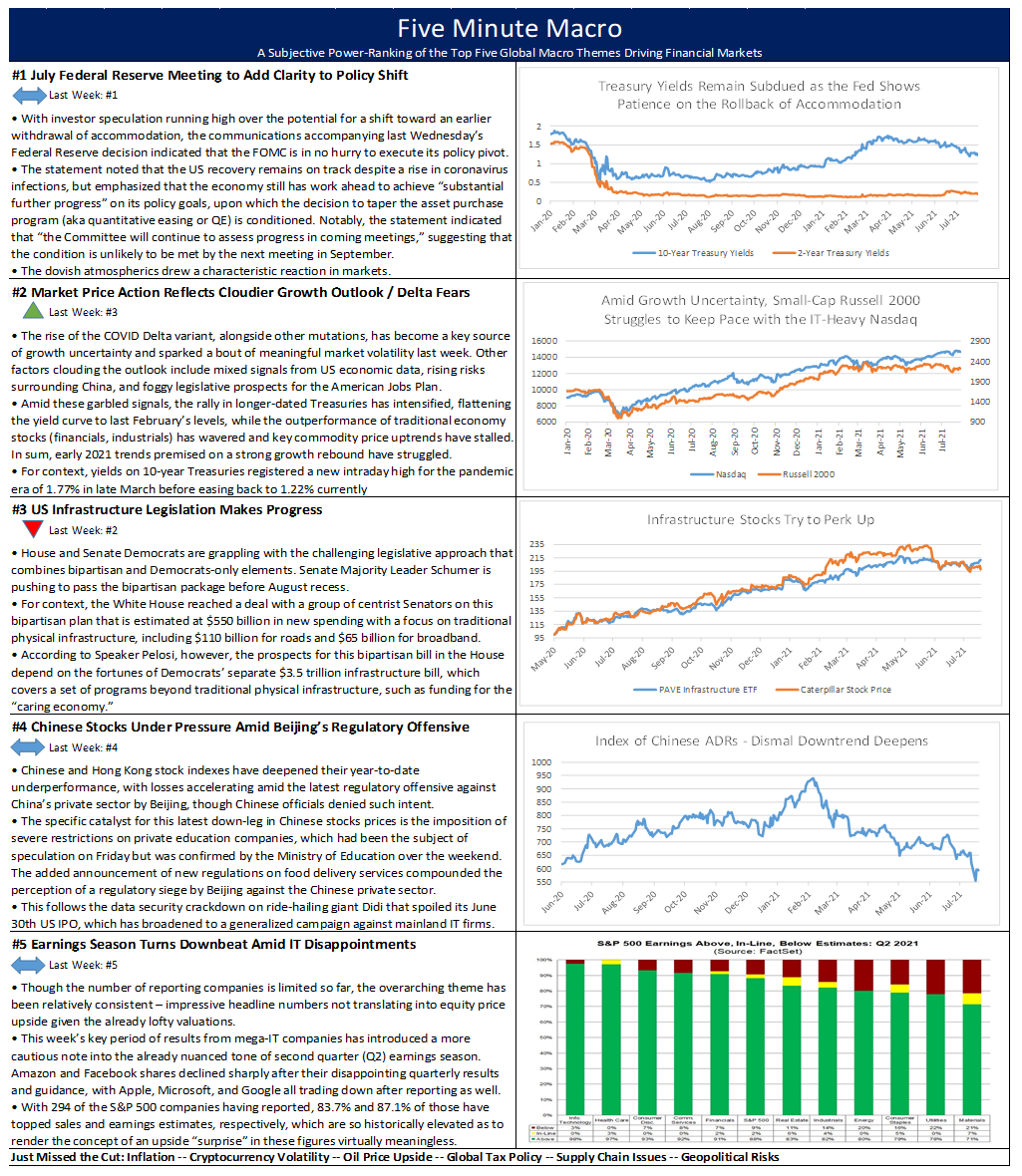 Growth and the Delta variant fears are driving a market sell-off, which clashes with the Fed’s pivot to tightening discussions. Infrastructure negotiations continue along with earnings season as oil prices fall following OPEC+ production increases. 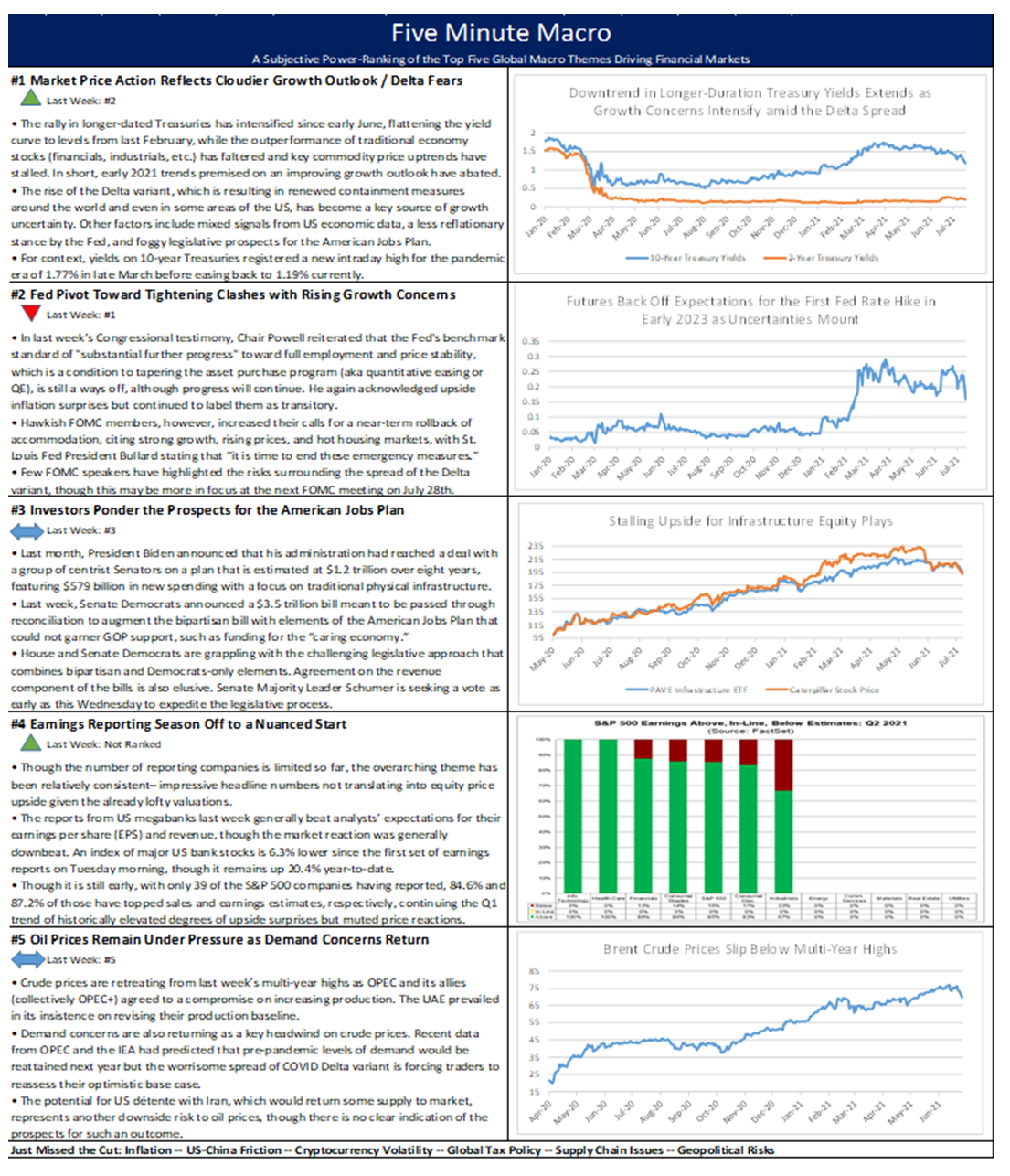 A big Fed Meeting is front and center this week while the market continues to wrestle with inflation and Treasury rates remain steady. Negotiations continue on the American Jobs Plan and finally oil continues to rally. 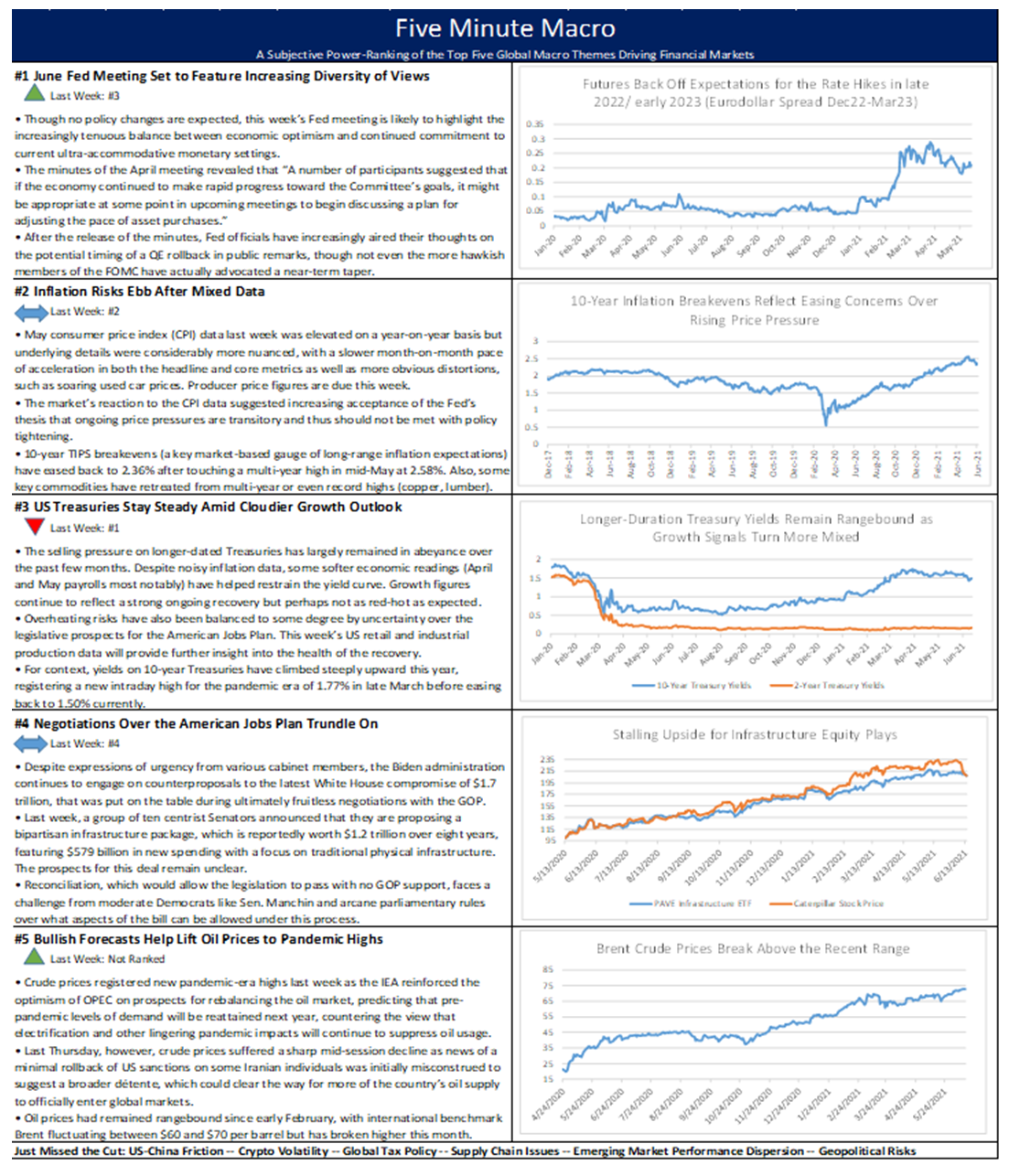 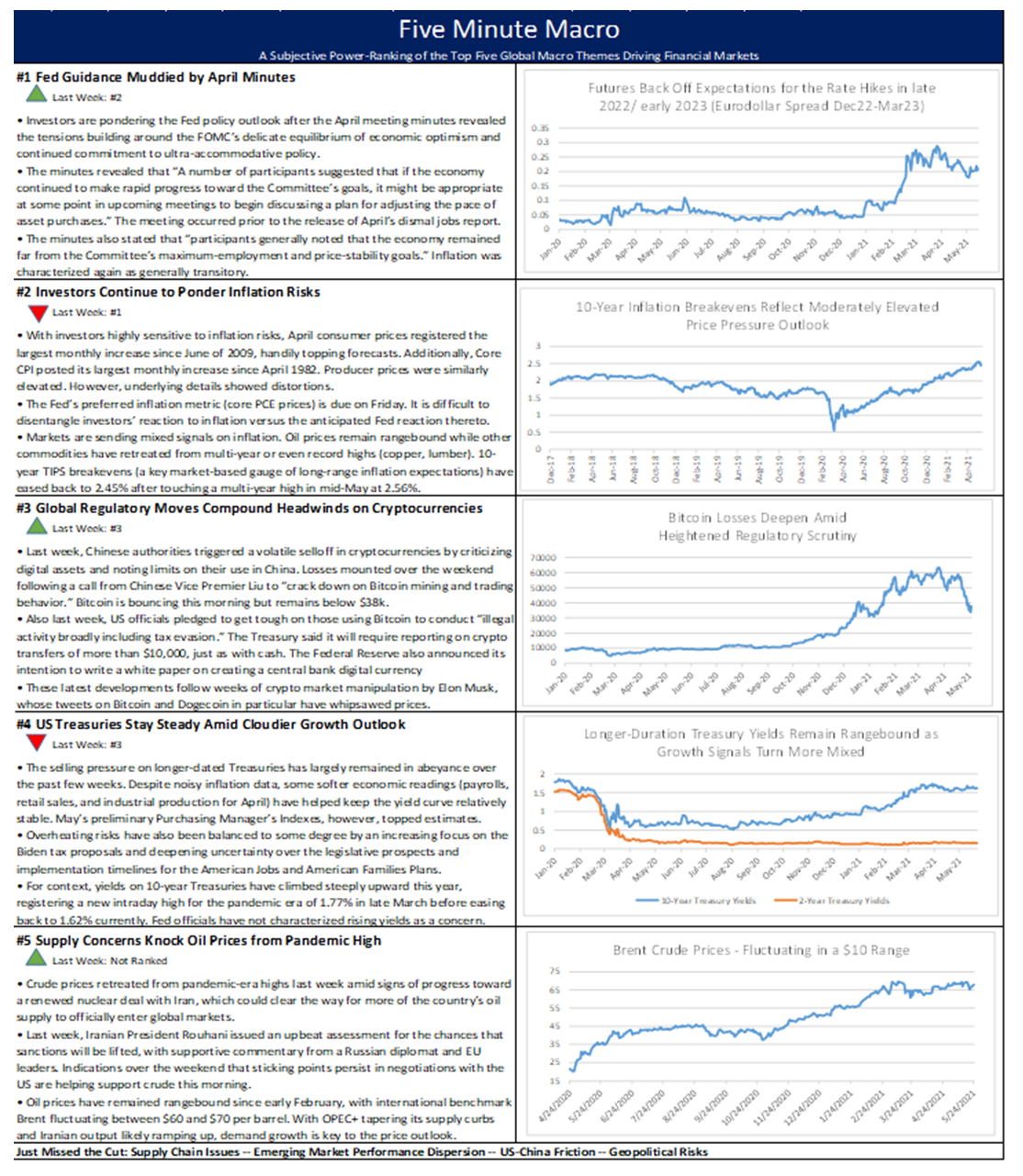 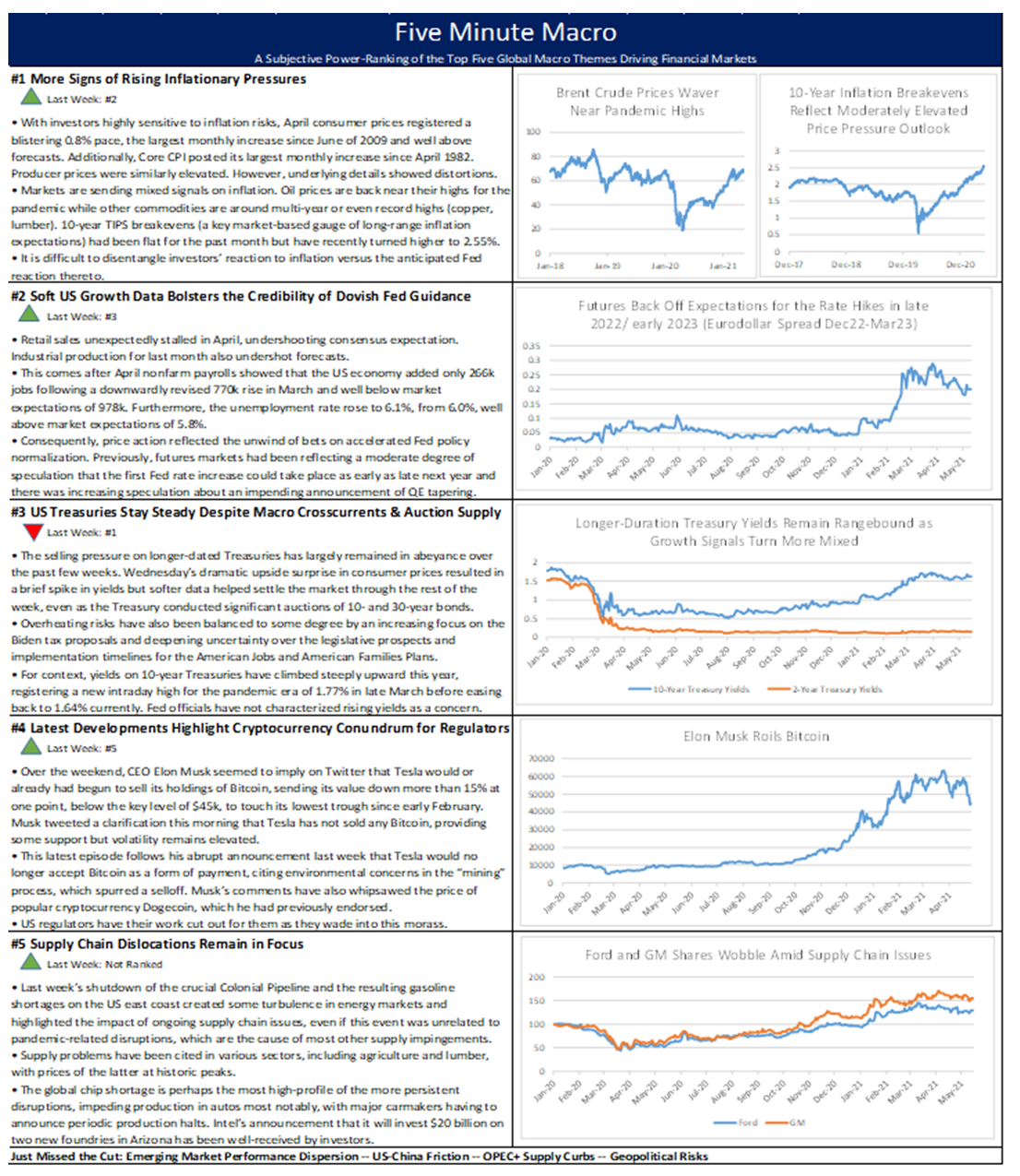 Global risk assets are mixed this morning as market participants digest last week’s rally and ponder the outlook for inflation amid high and rising commodity prices. S&P 500 futures indicate a 0.1% higher open after the index advanced 0.7% on Friday to surmount the prior week’s record high, taking year-to-date gains to 12.7%. The tech-heavy Nasdaq is set to open slightly lower after it outperformed on Friday amid doubts over the growth outlook following the lagging nonfarm payroll data. EU equities are moderately lower this morning while Asian indexes were mostly higher overnight. Longer-dated Treasuries are steady, with the 10-year yield holding at 1.58%, near the middle of its recent range. The broad dollar index remains unable to rally, sliding back to four-month lows. Oil prices continue to fluctuate at the top end of their recent range, with Brent crude nearing $69 as traders ponder the ramifications of the US pipeline shutdown (more below).

The prospect of higher gasoline prices in the US after a cyberattack over the weekend shut down a key East Coast pipeline is spurring further attention on price pressures, with an array of US inflation data due later this week. The continued disruption of the Colonial Pipeline due to a ransomware attack over the weekend is raising the specter of gasoline shortages in the eastern US ahead of the start of the summer driving season, when millions of stir-crazy Americans are eager to hit the road. As the White House forms a task force to confront the issue, traders are grappling with the ramifications for oil and gasoline prices. US benchmark WTI crude prices are moderately higher at $65.21 per barrel but remain below their recent peak in early March of $66.09, while futures markets remain consistent with prices settling lower over the coming quarters. Gasoline futures have been more volatile, with the June contract spiking over 4% at the outset of trading but have since settled to a more modest gain of 1.5%. While oil and gasoline prices are elevated relative to pandemic-era levels but not compared to historical peaks, other commodities, like copper and lumber, are registering all-time highs. Earnings reporting season featured management broadly agreeing with the Fed’s view that these price pressures are temporary and that supply bottlenecks will be cleared over the coming year to alleviate the price picture. However, uncertainty among investors over the issue of inflation remains considerable and this week’s US consumer, producer, and import/export price data will be scrutinized for signs of continued upside momentum after the March readings greatly outpaced estimates. Breakevens on 5- and 10-year TIPS, which are the main market-based gauges of long-run inflation expectations, are at cycle highs of 2.70% and 2.50%, respectively. Though these levels are not obviously out of line with the Fed’s average 2% inflation mandate given the amount of time the gauge has spent under 2%, their recently renewed uptrend is notable. – MPP view: We don’t doubt that a supply response can be mustered over the coming quarters to moderate these price dynamics, while US growth outperformance should help firm up the dollar and moderate the reflationary impulse, which should help validate the Fed’s expectations over the next year that price pressures settle down. But our long-run view is for a secular shift to a higher plane of inflation as globalization gradually rolls back and the pendulum shifts back from the disinflationary paradigm of the last decade.

After Elon Musk called popular cryptocurrency Dogecoin a “hustle” during an appearance on Saturday Night Live, sending the coin down over 30% last weekend before partially recovering, other crypto assets are relatively unmoved by the drama. Bitcoin is slightly lower this morning while Ethereum is hitting a new record high even as the crypto community ponders the significance of the mixed messages from Dogecoin’s most famous proponent. Ahead of his jocular dig against Dogecoin on the show, Musk had stirred up more excitement over his appearance by including the coin’s Shiba Inu dog in a promotional tweet the prior day. Perhaps providing some support to the beleaguered cryptocurrency was news that Musk’s SpaceX paid for a moon satellite mission entirely with Dogecoin. Given Dogecoin’s roots as a parody of Bitcoin, some analysts are speculating that its travails are beneficial to the more mainstream cryptocurrencies rather than a poor reflection on the asset class in its entirety. – MPP view: We continue to expect that the process of mainstreaming cryptocurrencies will involve further meaningful challenges to their valuations as Treasury and the SEC establish increasingly bright-line and robust regulatory and tax oversight. Please see our video below for a discussion on the regulatory outlook for crypto.

MPP Video: The Crypto Dome – Markets Policy Partners enters the Nucleus195 Crypto Dome, joining Adam Blumberg from Interaxis to discuss the shifting regulatory environment for cryptocurrencies, how the Treasury is likely to work in conjunction with the SEC, and what it all means for RIA’s and the individual investor. MPP Crypto Video

UK Pound Rallies as Scottish Independence Movement Hits Potholes – The Scottish National Party, which is intent on pushing toward another vote on Scotland’s independence from the UK, fell one seat short of an outright majority in the Scottish parliament but upped its tally to 64 of the 129 seats. Combined with the Green Party, analysts expect a strong pro-independence majority but still foresee a difficult road ahead for the movement. UK Prime Minister Johnson opposes another independence referendum for Scotland following the 2014 vote which resulted in a win for the unionists, though it is not clear if he will be able to block the effort. Market participants contemplate a lengthy process, clearing the near-term outlook for the pound, which is 0.8% higher versus the dollar this morning to re-approach February’s multi-year high.

Latest Podcast – Well That Number Was Unexpected – Tony, John, and Brendan are joined by Stratton Kirton, Managing Director at HPS, to break down the surprising April jobs numbers. The gang discusses why predictions may have missed the mark and what the numbers mean for the state of economic recovery. They also discuss Treasury Secretary Janet Yellen stepping on the Fed’s toes and the implications of the Biden administration’s COVID-19 vaccine patent decision. Latest Macrocast

Looking Ahead – This week features a major array of economic data, with the US consumer price index (CPI), the producer price index (PPI), retail sales, and industrial production, initial jobless claims, consumer sentiment, and small business optimism all due. Global inflation readings will also be in focus, with China’s CPI and PPI, along with CPI for Germany and France. UK GDP and EU industrial production data is also on the calendar, amid a recent trend of upside surprises for regional economic figures. The barrage of Fed communications will continue, with Vice Chair Clarida, Fed Governor Brainard, and hawkish outlier Dallas Fed President Kaplan all delivering remarks. OPEC will also issue its monthly oil report with crude prices fluctuating at recent highs.

China risks remain front and center while uncertainty around US infrastructure and debt ceiling move up to the second spot. Uneven economic data and rising oil prices along with inflation risks round out the top five spots. https://marketspolicy.com/five-minute-macro-9-27-2021/

We are sad that we won’t ever be able to experience Sophie’s joy again.

Growth and the Delta variant fears are driving a market sell-off, which clashes with the Fed's pivot to tightening discussions. Infrastructure negotiations continue along with earnings season as oil prices fall following OPEC+ production increases. https://marketspolicy.com/five-minute-macro-7-19-2021/

A big Fed Meeting is front and center this week while the market continues to wrestle with inflation and Treasury rates remain steady. Negotiations continue on the American Jobs Plan and finally oil continues to rally.
https://marketspolicy.com/five-minute-macro-6-14-2021/