Global financial markets are attempting to stabilize this morning amid increasingly forceful stimulus and support measures from central banks and governments, though historic levels of volatility and some heightened indications of systemic risk persist. S&P 500 futures have been choppy this morning but remain in positive territory despite surrendering more significant gains overnight. The index is still struggling to rally even after shedding 12.0% in yesterday’s session, the worst percentage point loss since “Black Monday” in 1987, while the past week has featured multiple sessions with moves of over 9%. Amid these wild swings, the S&P 500 is down 26.1% on the year, and 29.5% below its mid-February record high, as investors come to grips with the unprecedented ramifications of the pandemic and question the potential for government measures to counterbalance the multifaceted economic and financial fallout. Equities in Asia were mixed but relatively steady overnight while EU stocks have retreated from their earlier highs of the day. Treasuries are pausing their rally, with the 10-year yield rising to 0.81%, while the dollar is reaccelerating to the upside amid overseas demand. Oil prices remain depressed, but international benchmark Brent crude is edging above $30 per barrel.

With the intensifying magnitude of the pandemic forcing investors to contemplate potentially severe economic and personal hardship over the coming months, policymakers are seeking to enact even more radical measures to confront the interlocking public health, economic, and financial crises. Yesterday’s panicky price action, even after powerful easing on Sunday evening by the Federal Reserve, shifted the focus back to the fiscal and public health response, as investors grapple with the fact that broad swaths of the US economy, businesses and workers alike, will need direct and significant financial support from the government to make it through the coming weeks and months. Though some analysts cited President Trump’s remark that countermeasures against the virus could last into late summer months as adding to yesterday’s pessimism, others noted that contemplation of such an adverse outlook should help stiffen the resolve and focus the efforts of US policymakers. On the public health side, travel restrictions and quarantines continued to tighten in the US and overseas, with increasing numbers of cities and states ordering restaurants, cafes, and bars to close. On the fiscal front, Treasury Secretary Mnuchin is urging the Senate to quickly pass the emergency bill that he hammered out with House Speaker Pelosi last week. Mnuchin is reportedly set to propose a third stimulus bill that would offer $850 billion in economic support, though much of the total is said to be a payroll tax cut, a proposal which received a chilly reception on Capitol Hill last week. In addition to any such broad stimulus, analysts expect that large-scale industry bailouts will also be necessary.

Some Easing of Systemic Stress Signals Amid Forceful Fed Moves

With the Federal Reserve enacting major liquidity programs on Sunday, short-term funding and interbank markets appear calmer, though some significant fundamental strains remain evident in global financial markets. Analysts have been monitoring significant and rising pressure in short-term funding markets (which first emerged in September), overseas dollar liquidity, credit market metrics, commercial paper markets, and interbank funding. The Fed’s actions on Friday and over the weekend appear to have had a positive effect on US short-term funding markets, although repo rates remain choppy, and some signs of interbank pressures have moderated, while major US banks have agreed to tap the Fed’s discount window in unison in an attempt to facilitate its wider use (as in 2008). Still, overseas dollar liquidity gauges have worsened further. Also, credit markets remain consistent with a broad and worsening solvency crisis, particularly in some of the most impacted sectors, like energy, which is suffering further damage from the Saudi versus Russia oil price war. The commercial paper (CP) market is also experiencing continued stress, with some analysts suggesting that the Fed should begin to directly purchase CP in an effort to unfreeze this key source of corporate funding.

Boeing and US Airlines Request Government Support – With President Trump expressing an intention to support US airlines, an industry group has put forth a suggestion for up to $58 billion in aid of various kinds, including tax rebates and grants. Airline stocks moderately outperformed the broader S&P 500 yesterday but have suffered outsized year-to-date losses between 40% and 60% for the major US carriers. Boeing is also seeking government aid.

Increasingly Evident Economic Fallout from the Outbreak – While US data has only evidenced a minor impact of the outbreak thus far, the New York region manufacturing activity gauge for March crashed from 12.9 to -21.5, its worst level since 2009, providing a grim harbinger of the economic damage to come. Today’s retail sales and industrial production numbers for February are expected to remain steady before almost certainly contracting steeply this month. 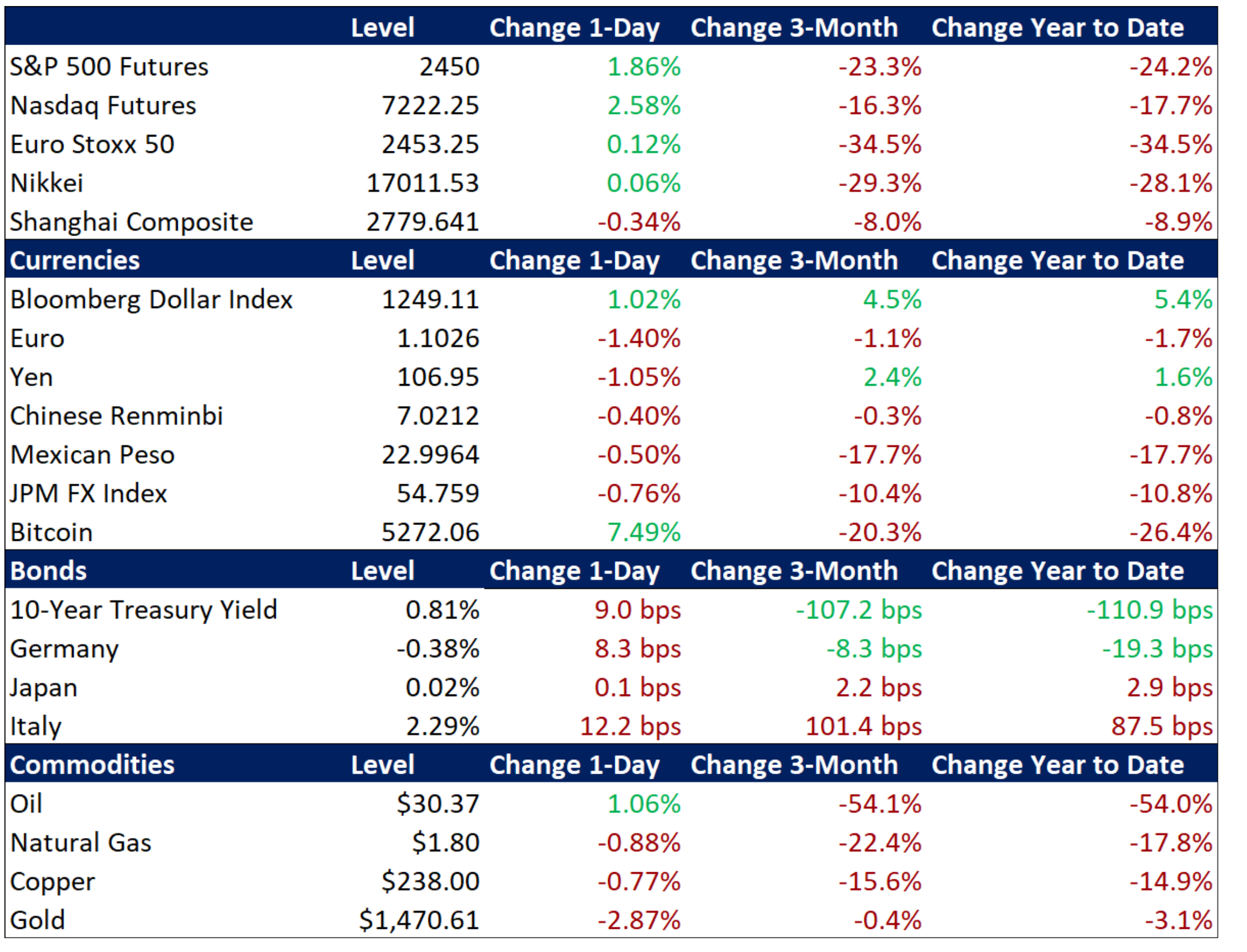