Global risk assets are extending this week’s sharp back-and-forth price action as investors ponder whether incoming policy support will provide a counterbalance to the human and economic toll of the outbreak, while noting the decline in US political uncertainty. S&P 500 futures indicate a 1.9% lower open as the index continues to struggle for directionality amid the significant macro crosscurrents. For context, the US equity benchmark soared 4.2% yesterday, nearly matching Monday’s 4.6% rebound and negating Tuesday’s 2.8% loss, putting the downside from mid-February’s record high at 7.6%. This week’s dramatic swings in global equities have been driven by the waxing and waning of investor optimism over prospects for synchronized stimulus from global central banks and governments to counteract the economic costs of the coronavirus epidemic. Equities in Asia gained in sympathy with yesterday’s rally in the US, but sentiment has proven fragile again this morning and EU stocks are 1.8% lower. Treasuries are extending their historic rally, driven by heightened safe haven demand, a darkening economic outlook, and rising expectations of Fed easing, with the 10-year yield at 0.97%, which is barely above Tuesday’s record lows. Meanwhile, the dollar is continuing to settle further below recent multi-year highs. Brent crude prices are holding above $51 per barrel as OPEC aims for deeper-than-expected cuts. – MPP note: Please listen to a special edition of our podcast, A Conversation on Coronavirus, featuring noted epidemiologist Dr. Christopher Mores. Links available on our website: https://marketspolicy.com/podcast-2/ 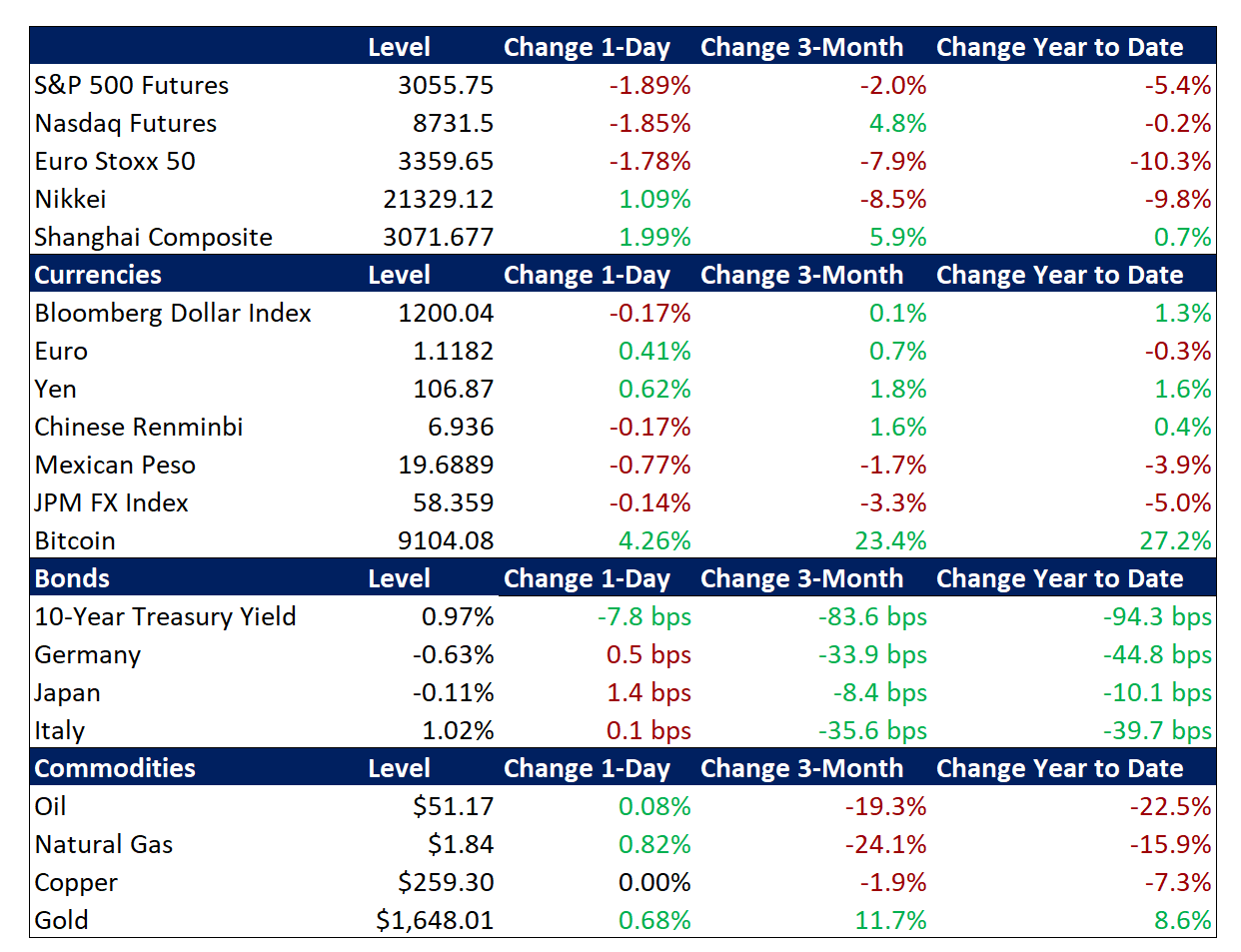 Effectiveness of Global Stimulus Questioned Despite Increasing Signs of Coordination

After Tuesday’s lukewarm G-7 statement and isolated emergency Fed rate cut, global central banks and governments started to get their act together yesterday, but investors remain highly uncertain over the efficacy of even well-synchronized economic support measures. With analaysts focused on prospects for robust and unified action by central banks and governments to mitigate downside risks to the global economy and financial markets from the epidemic, messaging improved yesterday. French President Macron tweeted that he had engaged in a productive discussion with President Trump and that the G-7 leaders were preparing to “coordinate our scientific, health, and economic response” to the virus. This contrasted with Tuesday’s bland G-7 statement, which provided scant reference to any actual coordination, indicating only that each member country would employ “all appropriate policy tools,” including fiscal stimulus “where appropriate” while central banks “will continue to fulfill their mandates.” Investors are cognizant that already-low interest rates render central bank cuts less impactful, and thus are highly attuned to the increasing emphasis on fiscal stimulus. French Finance Minister Le Maire indicated that EU governments must be ready to deploy fiscal stimulus, which will be “more effective” than monetary easing, a view echoed by the Eurogroup President Centeno. In the US, Congress is set to approve an $8 billion spending package aimed at countering the outbreak today. This more synchronized and energetic response underpinned a sharp rally in risk assets yesterday, although investor sentiment is relapsing again today.

After the Fed’s emergency rate cut on Tuesday, alongside accommodation from other global central banks, markets continue to reflect expectations of even more aggressive monetary stimulus. Following the Fed’s first intra-meeting rate cut since the global financial crisis, futures markets shifted the goalposts to price in yet another cut at the March 18 meeting, with around a 75% chance that the FOMC opts for another 50 basis point (bps) reduction at that meeting. At least 75bps of total additional easing is reflected by July. Some analysts project that rate cuts will be accompanied by an increase in liquidity operations, including the transformation of the ongoing asset purchase program into official quantitative easing. Yesterday’s Fed injection of liquidity into funding markets to meet banks’ outsized demand for cash has raised speculation that the FOMC will need to augment its asset purchase efforts. Meanwhile, Australia’s central bank cut rates this week, as did Bank Negara Malaysia, and the Bank of Canada reduced rates by 50bps at its meeting yesterday. The Bank of Japan has been injecting additional liquidity into its markets, the European Central Bank is expected to cut rates at their meeting next week, and analysts are attuned to the possibility of an emergency Bank of England rate cut.

US Political Uncertainty Eases – Analysts debated whether Joe Biden’s strong showing on Super Tuesday, which has dramatically upped his delegate count and vaulted him back into front-runner status, was a key factor in yesterday’s rally in US equities. The impact of US politics is much clearer in certain sectors, like policy-sensitive healthcare stocks, which soared yesterday.