Global risk assets were mixed overnight with investors closely monitoring today’s unofficial start to US corporate earnings reporting season. S&P 500 futures point to a 0.1% decline at the open, which would keep the index close to yesterday’s latest record high. Overnight, equities in Asia and the EU lacked direction, as analysts will look to today’s results from major US banks and other companies for positive or negative cues. Treasury yields are hovering in their recent range ahead of today’s US inflation data, while the dollar is edging to the stronger side. Oil prices are turning higher this morning as investors follow headlines from the ongoing conflict in Libya, which has maintained relatively steady production levels despite the unfolding civil war. Nevertheless, international benchmark Brent crude and US benchmark WTI remain below the levels that preceded the intensification of US-Iran tensions earlier this month. 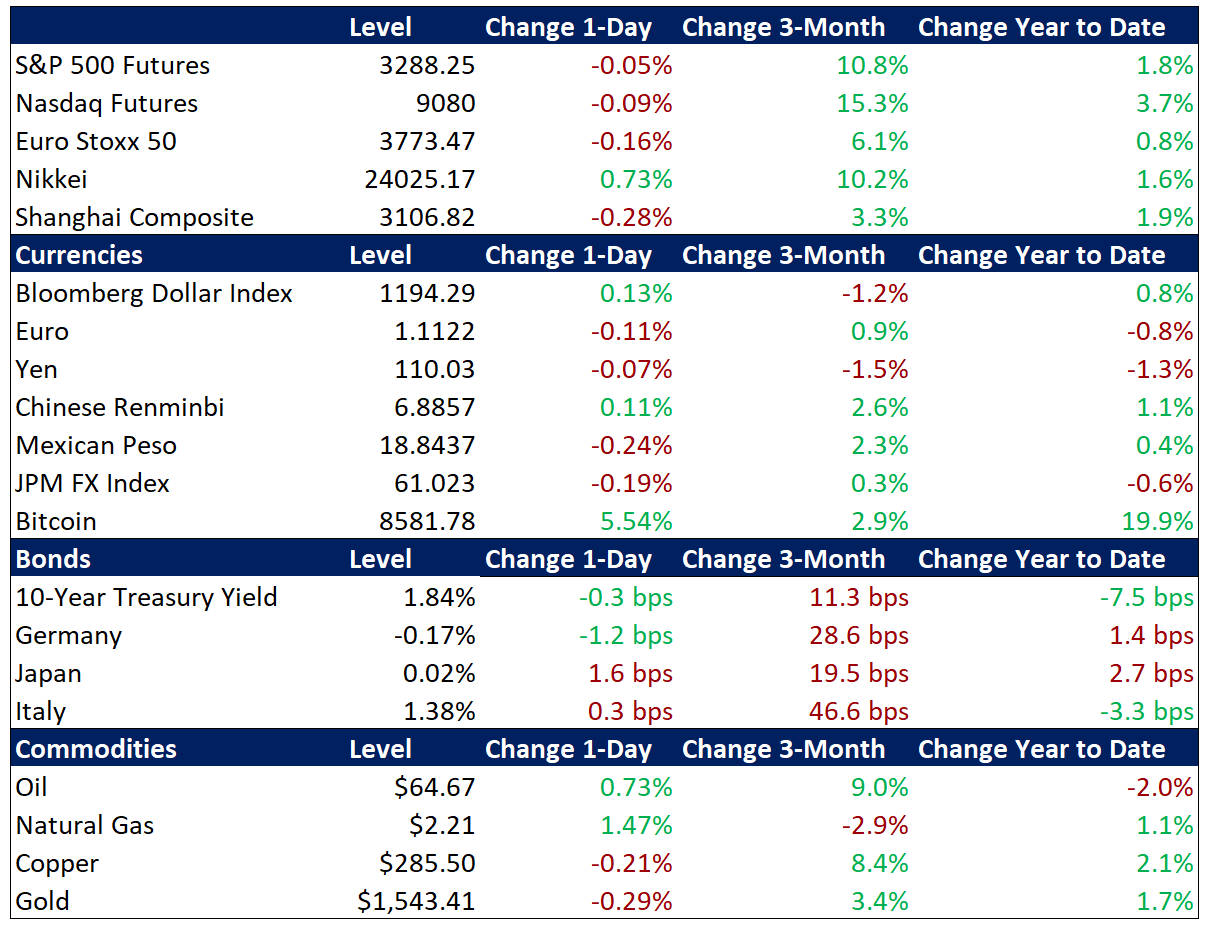 US stocks turned higher again yesterday but are pausing this morning as analysts await a potentially consequential set of fourth quarter (4Q) corporate results. This morning, peak 4Q corporate earnings reporting season begins with a heavy dose of US bank results. Today, analysts will see how the year ended for Citi, JPMorgan and Wells Fargo. Wednesday’s packed calendar features reports from Bank of America, Blackrock, Goldman Sachs, Charles Schwab, and United Healthcare. Thursday’s focus will be on Blackstone, CSX, and Morgan Stanley. And the week closes with Citizens Bank, Fastenal, and State Street. Last year, better-than-expected earnings provided a key upside catalyst to US equities despite modest year-on-year (y/y) earnings declines in the past three quarters. Overall S&P 500 company profits are expected to register another contraction in 4Q over last year at -2.0% y/y. Meanwhile, top-line revenue is forecast to expand 2.6% y/y last quarter, which would be the slowest pace of expansion since 2Q 2016. These tepid figures have not dampened investor enthusiasm for US stocks, however, given the expectation that companies have likely provided overly downbeat guidance in a repeat of recent quarters that featured high rates of upside surprises. Also, earnings growth is expected to rebound to around 4.5-6.5% y/y in the first half of 2020, and then improve even further thereafter, which suggests that the bar will be raised for companies to impress analysts.

Yesterday’s news that the US Treasury rescinded its designation of China as a currency manipulator further boosted investor hopes of a thaw in the world’s most important economic relationship. The long-awaited Treasury foreign exchange report, which was delayed beyond its usual fourth quarter publishing timeframe presumably due to ongoing negotiations with China, was released yesterday and labeled no countries as currency manipulators. For context, China’s brief designation as a currency manipulator was announced in August, not as part of the official report but in response to abrupt renminbi weakness after President Trump announced a new round of tariff threats. In the press release accompanying the Treasury’s report, Secretary Mnuchin is quoted as stating that “China has made enforceable commitments to refrain from competitive devaluation, while promoting transparency and accountability,” though official terms of the Phase One trade deal have not yet been made public. This came ahead of the arrival of a Chinese delegation led by Vice Premier Liu in Washington for the scheduled signing ceremony of the Phase One trade deal tomorrow. The renminbi has gained 0.5% versus the dollar since the news of this move by the Treasury and is at its strongest level since last August, having appreciated 4.0% over four months. Going forward, analysts expect that no progress will be made on a Phase Two deal before the US election in November. Meanwhile, China’s December trade figures picked up, with exports and imports rising to 7.6% y/y and 16.3% y/y, respectively, from -1.3% and 0.8% the prior month.

US Inflation Data – Today’s reading of December consumer prices (CPI) is expected to accelerate to 2.4% y/y from 2.1%, with a steady 2.3% y/y for core CPI. The Fed targets 2% inflation, but it prefers to use a different metric than CPI, instead focusing on the core personal consumption expenditure (PCE) price index. Core PCE is currently 1.6% and in the past five years has only topped 2% for a few months in the middle of 2018 and in early 2012. Futures markets continue to reflect a meaningful likelihood of another rate cut over the coming year.

BlackRock Focuses on Climate Change – CEO Fink of the mega-asset manager has stated in his annual letter to US corporate executives that his firm will be increasingly focused on climate-related issues in its investment decisions and engagement with companies. He characterizes this initiative as a “fundamental reshaping of finance” as the industry struggles to factor in the uncertain but potentially dramatic medium to longer-term impact of climate issues and sustainability into their traditional valuation metrics.