Global risk assets were mostly lower overnight after yesterday’s headlines dampened enthusiasm over the Phase One US-China trade deal, while investors continue to monitor US corporate earnings reports. S&P 500 futures indicate a flat open, which would retain the index’s modest decline yesterday from Monday’s record high. Overnight, equities in Asia and the EU were broadly subdued amid shifting expectations for US tariff reduction (more below). Treasury yields are lower but remain in their recent range ahead of tomorrow’s key US retail sales data, while the dollar is flat. Oil prices are slightly higher this morning as investors follow headlines from the ongoing conflict in Libya and await US inventory data. For context, crude prices are now trading below the levels that preceded the rising US-Iran tensions. 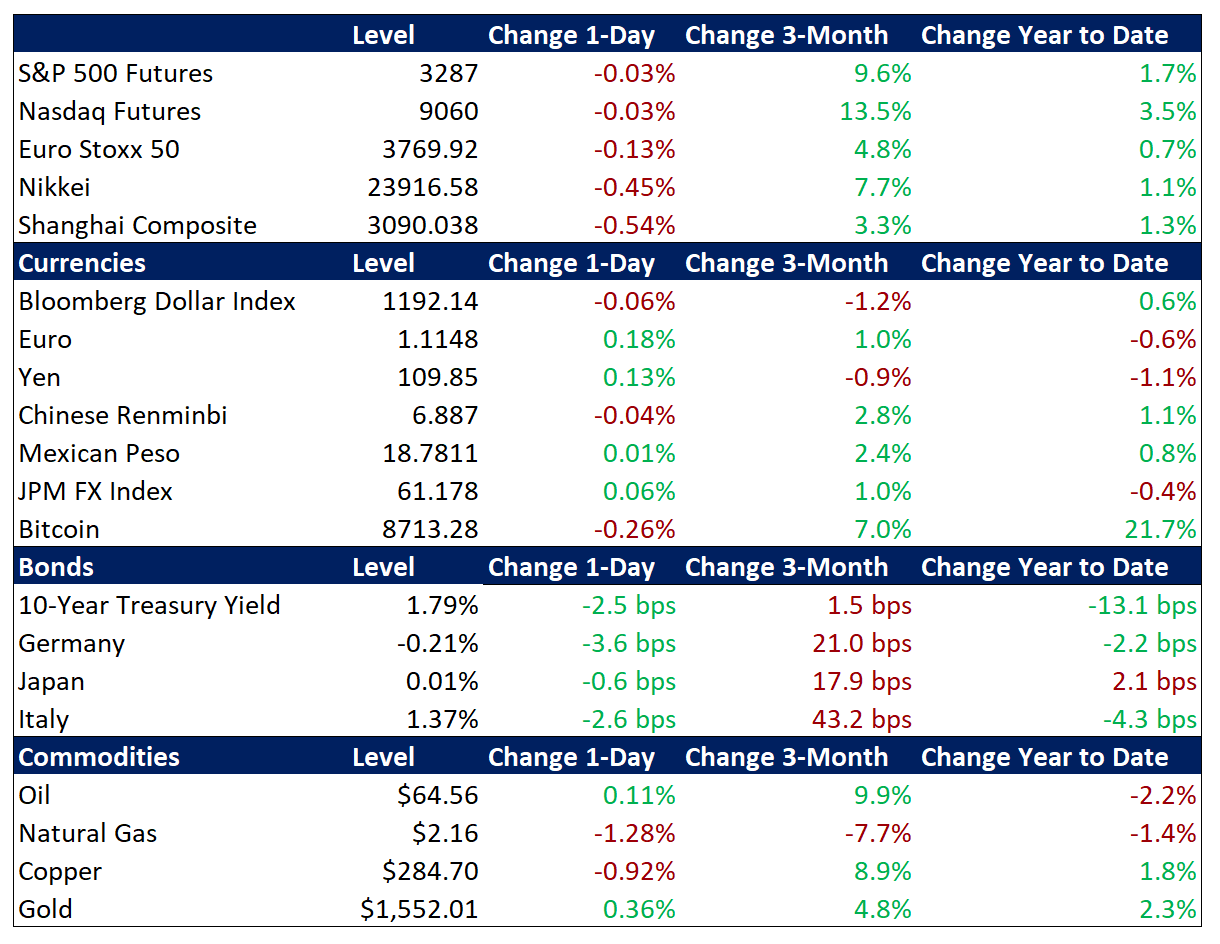 Earning Reporting Off to a Positive Start

Yesterday, US stocks rallied prior to the US-China tariff headlines as mostly solid corporate reports kicked off a potentially consequential set of fourth quarter (4Q) corporate results. Shares of JPMorgan Chase closed 1.0% higher after the bank reported fourth quarter (4Q19) profits and revenue that handily beat markets expectations on the back of strong trading revenue. Profits rose 21% to $8.52 billion, which equates to $2.57 per share, while analysts were expecting $2.35. Citigroup shares also rallied, climbing 1.6% after reporting earnings of $1.90 per share compared to $1.84 expected. The bank earned $18.38 billion on the back of strong fixed income trading that was almost double what analysts expected and 49% higher than 4Q18. However, shares of Wells Fargo traded down 5.4% after the bank reported disappointing earnings after newly appointed CEO Charles Scharf set aside another $1.5 billion for ongoing legal costs related to the bank’s fake-account sales scandal while also promising “fundamental changes”. Revenue of $2.87 billion came in well below the $6.06 billion earned a year earlier, while earnings per share of 60 cents missed analysts’ expectations of $1.12. Today’s packed earnings calendar features reports from Bank of America, Blackrock, Goldman Sachs, Charles Schwab, and United Healthcare. Thursday’s focus will be on Blackstone, CSX, and Morgan Stanley. And the week closes with Citizens Bank, Fastenal, and State Street. Last year, better-than-expected earnings provided a key upside catalyst to US equities despite modest year-on-year (y/y) earnings declines in the past three quarters and consensus expectations for another contraction in 4Q at a rate of -2.0% y/y.

US stocks surrendered gains in midday trading yesterday and remain subdued following headlines indicating that the Phase One trade deal will provide less tariff relief than investors had hoped. News that US tariffs of 25% on $250 billion and 7.5% on $120 billion of Chinese imports will be kept in place for a 10-month window for commitment enforcement knocked US equities from their highs of the day into negative territory and continue to exert a headwind on sentiment this morning. The final terms of the US-China Phase One trade deal have not been made public even though the signing ceremony is set for today. Despite the diminished expectations for the US and China to further unwind their tariffs, the renminbi is steady versus the dollar this morning, holding its recent gains at its strongest level since last August after having gained 4.0% over four months. Going forward, analysts expect no progress on a Phase Two deal before the US election in November. Meanwhile, China’s December trade figures picked up, with exports and imports rising to 7.6% y/y and 16.3% y/y, respectively, from -1.3% and 0.8% the prior month. Other key Chinese December data is due this week, including credit extension figures, retail sales, industrial production, and fixed asset investment.

Weak Economic Data Overseas – German bonds are rallying but the euro is stable versus the dollar after Germany’s 2019 GDP reading matched estimates of a dismal 0.6% y/y rate, down from 1.5% the prior year. This is the slowest pace since 2013 and the consensus outlook is for only a slight improvement in 2020 to 0.7% GDP growth. Meanwhile, UK consumer price inflation unexpectedly stagnated in December. This data has further lifted futures-implied odds of a Bank of England rate cut at the next meeting on January 30th to nearly 65%. However, the pound is steady versus the dollar, having already lost 2.4% over the past month.

Softening US Inflation Data – The Consumer Price Index (CPI), a key gauge of US inflation, increased 0.2% month-on-month (m/m) in December, slightly below market forecasts of 0.3%. This puts the CPI up 2.3% year-on-year (y/y), up from 2.1% in November and in line with consensus. Core CPI, which excludes volatile items such as food and energy, increased 0.1% m/m, missing market expectations of a 0.2% rise. On an annual basis, Core CPI was up 2.3%, in line with market forecasts. These slight downside surprises depressed Treasury yields. Producer price inflation figures for December are due today, with expectations for muted pressures.