Global risk assets generally advanced overnight, mirroring yesterday’s rebound for the S&P 500, as investor sentiment steadies amid a lull in US-Iran hostilities despite bellicose rhetoric from Teheran. S&P 500 futures indicate a 0.1% gain at the open, which would build on yesterday’s moderate upside and take the index nearly back to last Thursday’s record high. Overnight, equities in Asia and the EU rallied, taking a bullish cue from yesterday’s steady recovery for the S&P 500 as investors continue to assess the geopolitical outlook. Improving risk appetite has in turn eased demand for safe haven assets, slowing the rallies in Treasuries, gold, and the yen this morning. Yields on 10-year Treasuries are hovering at 1.80% after rising as high as 1.95% in December, and remain well above September’s trough of 1.46%. The dollar is treading water near multi-month lows ahead of key US economic data (more below). Amid the calmer tone in markets, oil prices are pulling back from multi-month highs, with international benchmark Brent crude below $69 per barrel and US benchmark WTI under $63. 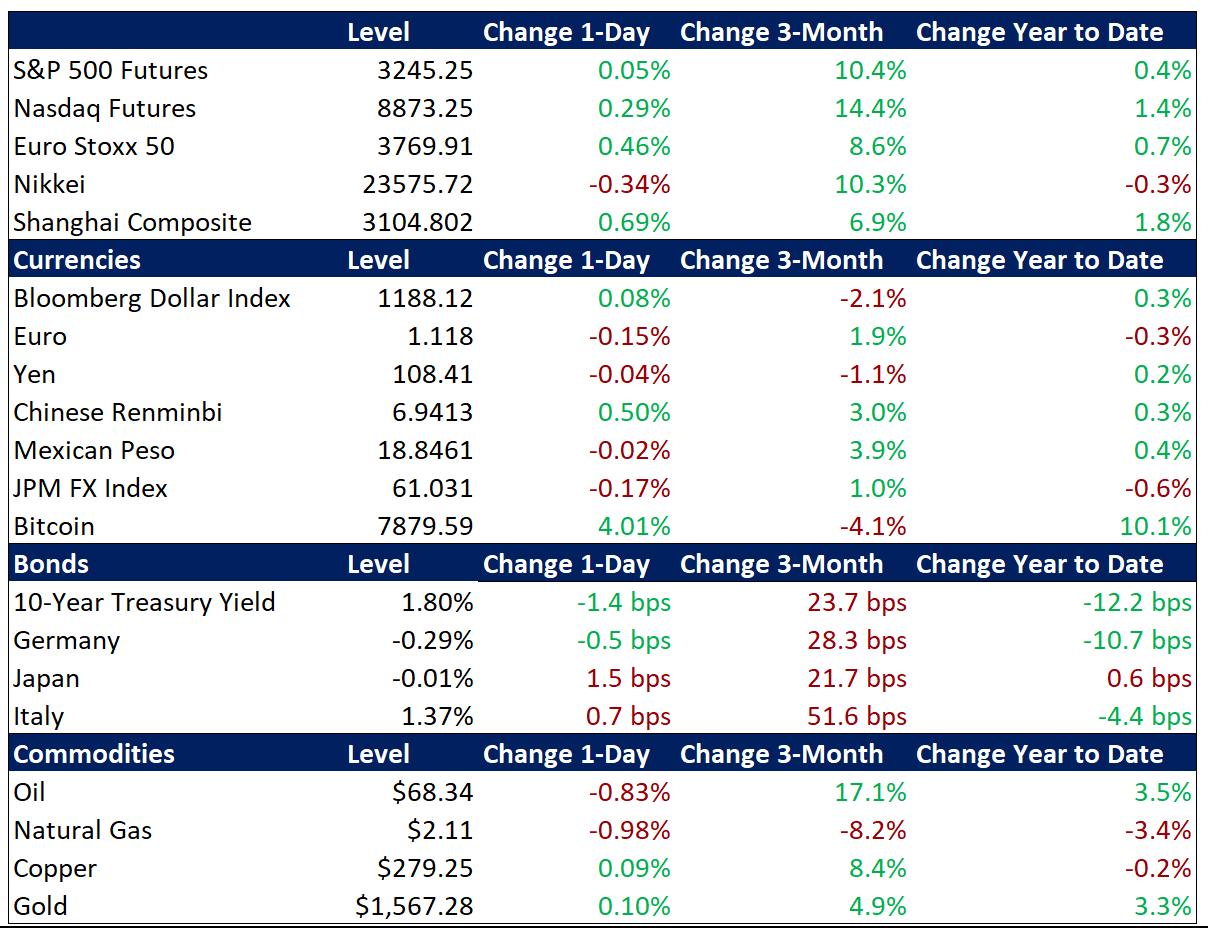 Investors continue to ponder heightened geopolitical risks but the lack of immediate and direct retaliation from Iran has supported hopes that further escalation will be limited. Overnight, the leader of Iran’s national security council stated that thirteen different options for retaliation were being considered following the US airstrike that killed a top Iranian general in Baghdad late last week, warning that any of them would be a “historic nightmare” for the US. This threat registered briefly in markets, with S&P 500 futures ceding their gains but subsequently rebounding. This was followed by a statement from Iran’s Foreign Minister calling the US action as “state terrorism” to which Iran will “respond proportionately.” Additionally, analysts note that the dozens of fatalities and injuries due to a stampede at General Soleimani’s funeral could further fuel Iranian desires for retribution against the US. Meanwhile, speculation continues over US troop movements amid intrigue over a purported withdrawal letter for US military in Iraq, which circulated in the media yesterday. For context, Iraq’s Parliament passed a non-binding resolution to expel US troops from the country earlier this week, prompting President Trump to warn that US withdrawal would be costly for Baghdad, demanding reimbursements and threatening sanctions. Defense Secretary Esper indicated that no decision had been made regarding the US military presence in Iraq. Despite heightened risks, investor sentiment has proven resilient, with the S&P 500 resuming its uptrend yesterday, led by more defensive sectors and energy companies, which benefit from higher oil prices. The S&P 500 finished yesterday’s session less than 0.4% below last Thursday’s record high.

Despite uneven worldwide economic figures, expectations for a lasting US-China tariff truce and 2019’s monetary easing campaigns by global central banks continue to support hopes of a medium-term worldwide growth rebound. Recent indicators have been mixed but suggest modest improvement, most notably in the EU. This morning’s release of EU retail sales figures for November was encouraging, showing a year-on-year (y/y) acceleration to 2.2%, topping the 1.5% estimate as well as October’s upwardly revised 1.7%. Meanwhile, December consumer price inflation figures for the region reflected stable price pressures, although at a weak level, with the 1.3% y/y pace for both headline and core gauges matching estimates. This follows yesterday’s modest upside surprise for the EU’s December composite purchasing managers’ index (PMI), which combines both manufacturing and service sector readings. Although the euro’s ongoing rally is pausing today, it remains near its strongest level versus the dollar since August. In the US, recent data has been somewhat mixed. The major upside surprise in US payrolls data for November further boosted optimism, but that month’s retail sales were disappointing and the US manufacturing gauge for December undershot estimates. Analysts await a reading of US December service sector activity this morning and jobs data on Friday.

Stronger Renminbi Ahead of Trade Deal Signing – The renminbi has advanced to its strongest level versus the dollar since August ahead of next week’s planned Chinese delegation to the US, which is set to conclude with a signing ceremony for the Phase One US-China trade deal on January 15. The renminbi has appreciated 3.3% since bottoming against the dollar in early September and is now beyond the closely-watched 7 renminbi-per-dollar threshold. Although the US Treasury labeled China a currency manipulator over the summer, its official Foreign Exchange Report for the second half of 2019 has not been published and it is unclear if China will be relieved of this designation following the Phase One trade deal signing.

Orderly Brexit in Sight – The pound is dipping from one-year highs as traders ponder the outlook for fiscal expansion after what is expected to be a clean exit from the EU this month.