Global risk assets are attempting to stabilize this morning after Friday’s sharp decline and severe losses for newly reopened mainland Chinese markets overnight, as investors weigh concerns over the coronavirus outbreak against broadly supportive corporate earnings. S&P 500 futures indicate a 0.4% gain at the open, which would pare the index’s 3.1% downside from its record high earlier this month. Last week, investors had been attempting to look past the impact of the viral outbreak emanating from central China but by Friday the growing uncertainty prompted a steep US equity selloff and volatility levels remain elevated. Overnight, equities in Asia were mixed even as mainland Chinese markets suffered significant downside upon reopening from the Lunar New Year holiday. Meanwhile, EU equities are posting modest gains. Treasuries are retracing a portion of their recent rally, which has been driven by safe haven demand, with the 10-year yield edging above three-month lows at 1.54%. The dollar is stronger as the pound and renminbi both decline around 1% (more below). Crude oil is extending its steep downtrend as Brent prices sink to multi-month lows below $57 per barrel. 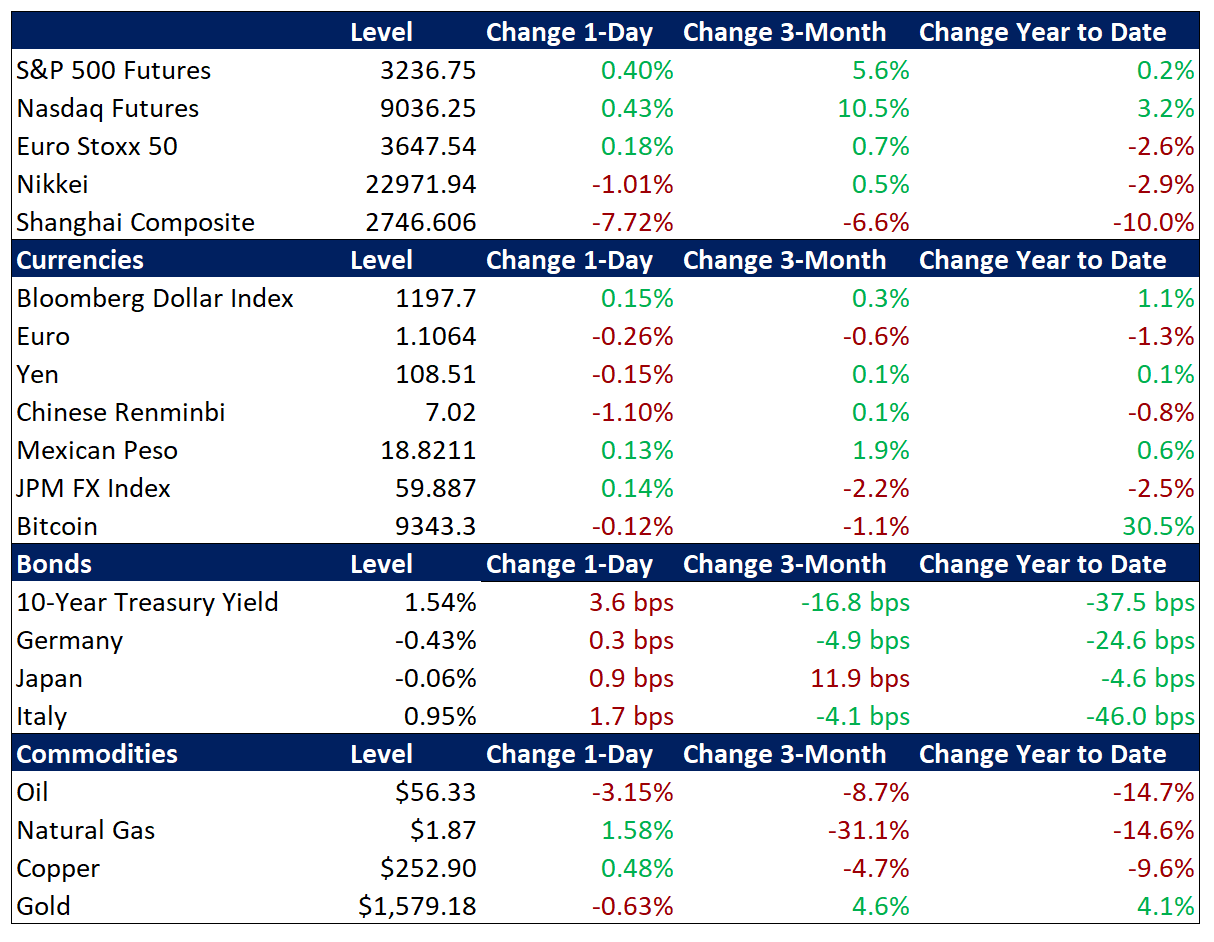 As investors continue to monitor the pace of the outbreak, mainland Chinese markets opened to heavy selling even as authorities attempted to cushion the blow, while US stocks are set to stabilize after Friday’s plunge. The Shanghai Composite reopened to major declines after being closed for more than a week on an extended Lunar New Year holiday break. Losses of nearly 10% marked the intraday low, with support from various policies helping the index recover to a session decline of 7.7%. Specifically, Chinese officials effected a variety of supportive initiatives, including a People’s Bank of China liquidity injection of 1.2 trillion renminbi into domestic banks, modest cuts of certain policy rates, and a ban on short-selling stocks. The renminbi, meanwhile, lost 1.1% versus the dollar, depreciating past the closely-watched 7 level, matching losses already reflected in last week’s offshore renminbi trading. Headlines over the weekend kept investors on edge, with reported infections rising to 17,485 and fatalities to 362, as more governments around the world impose travel restrictions on mainland China. Nevertheless, US equities are attempting to recoup some of Friday’s nearly 2% losses, which were spurred by fears of adverse developments while markets were closed on Saturday and Sunday.

Although fourth quarter (4Q19) corporate reports generally continue to impress, coronavirus-related risk aversion has capped gains. Amazon returned to the $1 trillion market club on Friday, which includes Apple Google and Microsoft, after 4Q earnings smashed expectation and the company also gave upbeat guidance for 1Q20. Shares rose 7.4%. Also, IBM jumped 5.1% after the computer software company announced CEO Ginni Rometty will step down in April. Rometty, who has served at the helm of the company since 2012, will be replaced by Arvind Krishna. Shares of Colgate-Palmolive rose 6.2% after 4Q19 sales beat consensus expectations and in-line earnings. Meanwhile, Caterpillar’s stock fell 3.0% after 4Q earnings of revenue fell 8% from a year earlier and missed analyst’s expectations. The company also provided a guarded outlook due to “global economic uncertainty.” Of the 225 S&P 500 companies that have reported 4Q19 results, 74% have topped earnings expectations and 64% have beaten sales estimates. This is the final week of peak earnings reporting season, and features Google, Aflac, Allstate, Prudential, Clorox, Chipotle, Disney, Ford, GM, MetLife, Qualcomm, Kellogg, Philip Morris, T-Mobile, Tyson Foods, and Twitter.

OPEC Seeks to Support Oil Prices – With the impact of the coronavirus on oil demand worsening an already challenging outlook, and Brent crude trading at its lowest level since August, headlines this morning indicate that OPEC is considering an emergency meeting to push for additional supply cuts to support prices. For context, reports this morning that China’s oil demand has dropped 20% during the coronavirus outbreak sent crude oil prices spiraling downward but the OPEC news has roughly halved the losses to 2.6%. February 14-15 are said to be the dates under consideration for the OPEC meeting, amid estimates of a potential 500k barrel per day coordinated output cut, though Iran and Russia are reportedly reluctant.

Pound Slides Post-Brexit – To start its first full week of trading following the UK’s official departure from the EU on Friday, the pound is 1.1% lower versus the dollar as the focus shifts from Brexit to the upcoming challenge of forging a trade agreement between the EU and UK. Even so, the pound remains well off August’s multi-year lows. Today’s speech by Prime Minister Johnson emphasized his willingness to reject an unfavorable post-Brexit trade deal with the EU while Chief EU negotiator Barnier stressed that the UK will need to remain bound by an array of EU standards in any future trading relationship.