Global risk assets generally rallied overnight as many investors remain determined to look past the near-term economic and corporate fallout from the coronavirus outbreak, through Treasury markets remain consistent with a more downbeat outlook. S&P 500 futures indicate a 0.3% gain at the open, which would retrace yesterday’s modest downside and bring the index back to Friday’s latest record high. Apparently slowing infection rates in China have fueled optimism that the impact of the epidemic will be shallow and fleeting, though analysts are bracing for worsening economic data and more corporate outlook downgrades, like yesterday’s warning from Apple. Overnight, equities in Asia were broadly higher, though the Shanghai Composite remains out of step with its peers and posted a moderate loss, while EU stocks are retracing yesterday’s decline. Meanwhile, Treasuries are holding their recent gains amid elevated safe haven demand and a cloudy economic outlook, with the 10-year at 1.56%. The dollar is edging stronger to extend its year-to-date rally, with a closely-followed dollar index at its highest level since October (more below). Crude oil prices are turning upward again this morning, with Brent advancing above $58 per barrel. 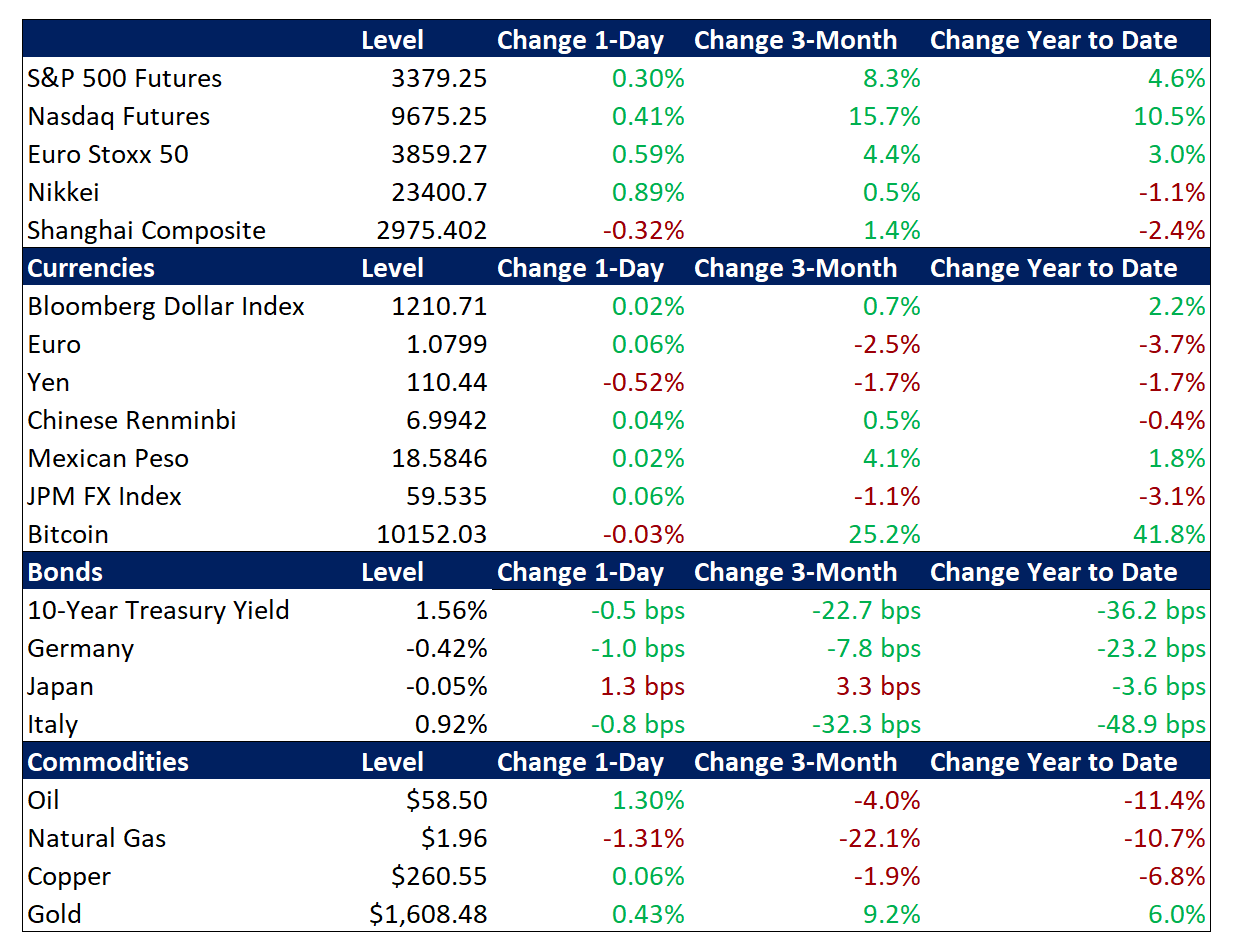 Covid-19 Concerns Linger but Investors Bet on Containment and Stimulus

Although Monday’s revenue outlook downgrade by Apple briefly shook investor faith that the economic impact from the virus will be brief and modest, nerves have steadied overnight. Once again, the source of optimism appears to be the decline in reported cases in Hubei province, the epicenter of the outbreak, where yesterday’s tally of infections was the lowest since authorities revised their diagnosis guidelines last week. Now, total infections are reported to be 75,201 while fatalities have reached 2,012. Meanwhile, the list of corporates reporting a significant impact on their business continues to grow. Sportswear giant Adidas indicated that its sales in China are down around 85% in recent weeks and competitor Puma noted that half of its outlets in China remain closed. And Chinese oil refineries are said to be running at a rate 25% below this time last year. Amid this growing catalog of corporate concerns, however, only Apple’s warning on Monday that it will not meet revenue targets this quarter due to the effects of the Covid-19 outbreak seemed to have a broader impact on market sentiment, and only briefly. Apple shares largely recouped early losses in yesterday’s trading and are up again in the pre-market. In general, corporate earnings revisions currently reflect little evidence of a drag from the virus, although that could change if containment efforts take longer than anticipated.

Following last week’s balanced Congressional testimony by Chair Powell, investors will monitor today’s release of the minutes of January’s FOMC meeting and remarks from an array of Fed speakers. This afternoon, the Fed will release its minutes from the January meeting, at which the FOMC left the target range for its federal funds rate unchanged at 1.5-1.75%, as was widely expected. The accompanying statement noted that the current stance of monetary policy is appropriate to support sustained expansion of economic activity, strong labor market conditions, and inflation returning to the Fed’s 2% objective. While this suggests that no changes in the funds rate should be expected during this year, in line with FOMC projections made in December, analysts will parse the minutes for any suggestion of an increasing bias toward easing. Futures markets reflect nearly 50% odds that the Fed will restart rate cuts by the June meeting, and one full 25 basis point rate cut and meaningful likelihood of a second are being priced in before March 2021. Fed Chair Powell’s expressions of concern over the potential impact of the outbreak in his testimony last week emphasized the downside risk to policy rates over the coming months. Additionally, any further details on the Fed’s plans for its ongoing balance sheet expansion program will be in focus. For context, many market participants view the program as stealth stimulus measure rather than a technical adjustment, as Fed officials have characterized it. Also today, regional Fed presidents from Atlanta, Minnesota, Dallas, Richmond, and Cleveland all deliver remarks.

Traders Noting Euro Weakness – Amid a series of disappointing EU economic figures over recent weeks and expectations that the Covid-19 outbreak will hit the bloc harder than the US, the euro has retreated sharply versus the dollar, falling 3.7% year-to-date to register its weakest level since spring 2017. Market odds are rising for more European Central Bank easing.

US Politics in Focus as Democrat Field Shifts – Investors are noting the rise of Mike Bloomberg and Senator Klobuchar in recent polls, as well as Bloomberg’s proposals for a financial transaction tax, tighter bank oversight, and enhanced consumer protections for investors. Bloomberg will join tonight’s debate, with analysts focused on how he will handle the jabs from the more seasoned candidates and contend with current front-runner Senator Sanders.