Global risk assets were mixed overnight despite more stimulus measures in China as investors monitor the ongoing coronavirus epidemic, divergent central bank policies, and dollar appreciation. S&P 500 futures point to a 0.2% decline at the open, which would take the index slightly below yesterday’s latest record high. Apparently slowing infection rates in China have fueled optimism that the impact of the epidemic will be shallow and fleeting, though questions about the diagnostic data persist and analysts are bracing for worsening readings of economic and corporate activity. Overnight, equities in Asia were mixed, as the Shanghai Composite outperformed on further monetary easing, while EU stocks are posting moderate downside. Treasuries are building on their recent gains amid elevated safe haven demand and a cloudy economic outlook, with the 10-year at 1.54%. The dollar is up 0.4%, extending its year-to-date rally, with a closely-followed dollar index at its highest level since September (more below). Crude oil prices are holding up this morning, with Brent trading above $59 per barrel. 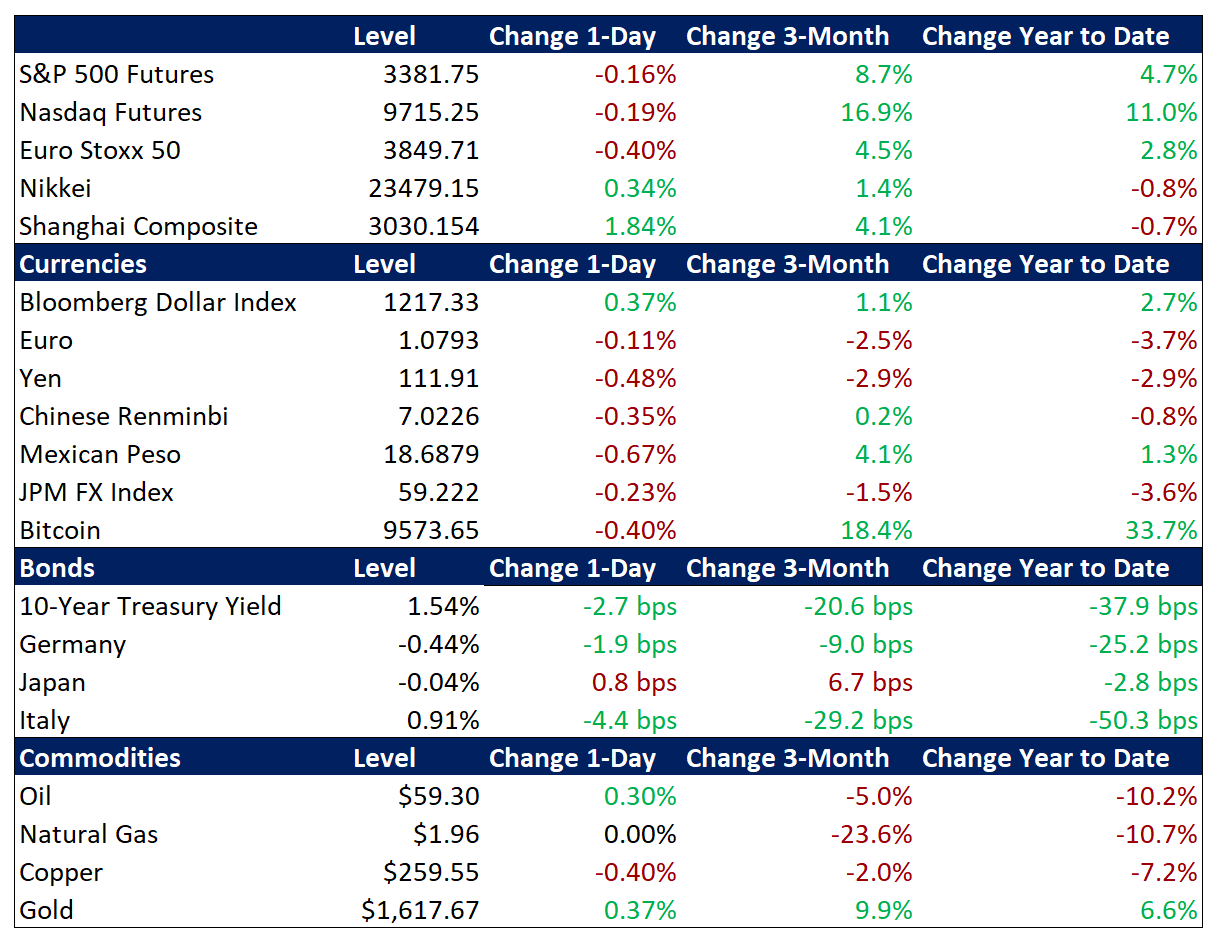 The People’s Bank of China (PBoC) reduced its prime loan rates overnight, as expected, while the minutes of the Fed’s January meeting conveyed a stable outlook, lifting the dollar versus the renminbi. A broad dollar index compiled by Bloomberg is near its highest level in a year and the renminbi depreciated another 0.4% overnight, passing the closely-watched 7 to the dollar level, as investors focus on the disproportionate economic impact of, and divergent policy responses to, the coronavirus outbreak. The US is currently less effected, spurring inflows into US equities, Treasuries, and the dollar. Overnight, the PBoC unveiled another set of easing measures, cutting the one-year and five-year prime loan rates to 4.05% and 4.75%, respectively, from 4.15% and 4.8%. Though the reductions were modest, analysts expect that more cuts will soon be enacted, and the Shanghai Composite reacted favorably, rising 1.8%, while the renminbi slid to its weakest level versus the dollar since early December. Other global central banks may also be restarting their easing cycles, and today’s release of the European Central Bank’s minutes from its late January meeting may provide insights on possible new accommodation strategies. Contrastingly, the Federal Reserve’s minutes of their January meeting, at which they voted to leave the policy rate in a range between 1.5%-1.75%, stated that the “current stance of monetary policy was appropriate” and that holding rates at current levels “would give the Committee time for a fuller assessment of the ongoing effects on economic activity of last year’s shift to a more accommodative policy stance.” Nevertheless, futures continue to reflect around 50% odds that the Fed cuts rates by the June meeting.

Solid US Data Adds Further Support for the Dollar

Yesterday’s robust gain in producer prices and better-than-expected housing data continued the string of outperforming US growth readings, while analysts await key global manufacturing data next week. The US producer prices index (PPI) jumped 0.5% month-on-month (m/m) in January, well above consensus expectations of a 0.1% rise. This is the largest monthly gain since October of 2018. Core PPI also rose 0.5% m/m, versus an expected 0.1% rise. Year-on-year, the PPI rose 2.1%, the swiftest advance since May 2019. Meanwhile, housing starts fell 3.6% m/m in January to a seasonally adjusted annual rate (SAAR) of 1.567 million units in January but still came in above market expectations of 1.425 million, as December starts were revised up to 1.626 million, the highest overall level since December of 2006. Later today, preliminary February manufacturing purchasing managers’ indexes (PMIs) for Japan are due, with the EU and US readings to follow tomorrow morning. If US PMI readings outperform to a greater degree than expected, the dollar could receive a further boost versus the yen and euro. For context, the yen and euro have weakened 3.0% and 3.7%, respectively, year-to-date versus the dollar, with the yen at a ten-month low and the euro at a nearly three-year low.

Virus Concerns Linger – Analysts are again noting questions about the credibility of the outbreak data in China after officials in Hubei province, the epicenter of the outbreak, again shifted the diagnosis guidelines, this time dramatically reducing the reported cases. Now, total infections are reported to be 75,751 while fatalities have reached 2,130. Meanwhile, the list of corporates reporting a significant impact on their business continues to grow.

Emerging Market (EM) Central Banks Easing – Brazil’s central bank reduced the reserve requirements for banks’ time deposits from 31% to 25% amid downgrades to its economic outlook. Bank Indonesia also eased policy, cutting its key rate 25 basis points to 4.75%. The Brazilian real has weakened sharply versus the dollar to a record low this year, while the Indonesian rupiah has outperformed its EM peers. A popular index of EM currencies compiled by JPMorgan is at its weakest level since inception.