Global risk assets were mostly lower overnight as spreading coronavirus cases outside China weighed on sentiment, while investors monitor key growth data for signs of an impact from the outbreak. S&P 500 futures indicate a 0.3% decline at the open, which would extend the index’s modest losses yesterday but remain within 1% of Wednesday’s latest record high. Apparently slowing infection rates in China had fueled optimism over the past few weeks that the impact of the epidemic will be shallow and fleeting. However, this week’s news of widening outbreaks in neighboring countries, questions about China’s diagnostic data, warnings from corporates over the growing impact, and early signs of the economic toll have rekindled a degree of risk aversion in global stock markets. Overnight, equities in Asia were mostly lower, though the Shanghai Composite again outperformed, while EU stocks are also posting modest downside. Treasuries are extending their recent rally amid elevated safe haven demand and a cloudy economic outlook, with the 10-year yield at 1.49%, its lowest level since September. The dollar is steady, holding its year-to-date gains, with a closely-followed dollar index at its highest level since September. Crude oil prices are relapsing, with Brent trading near $58 per barrel. 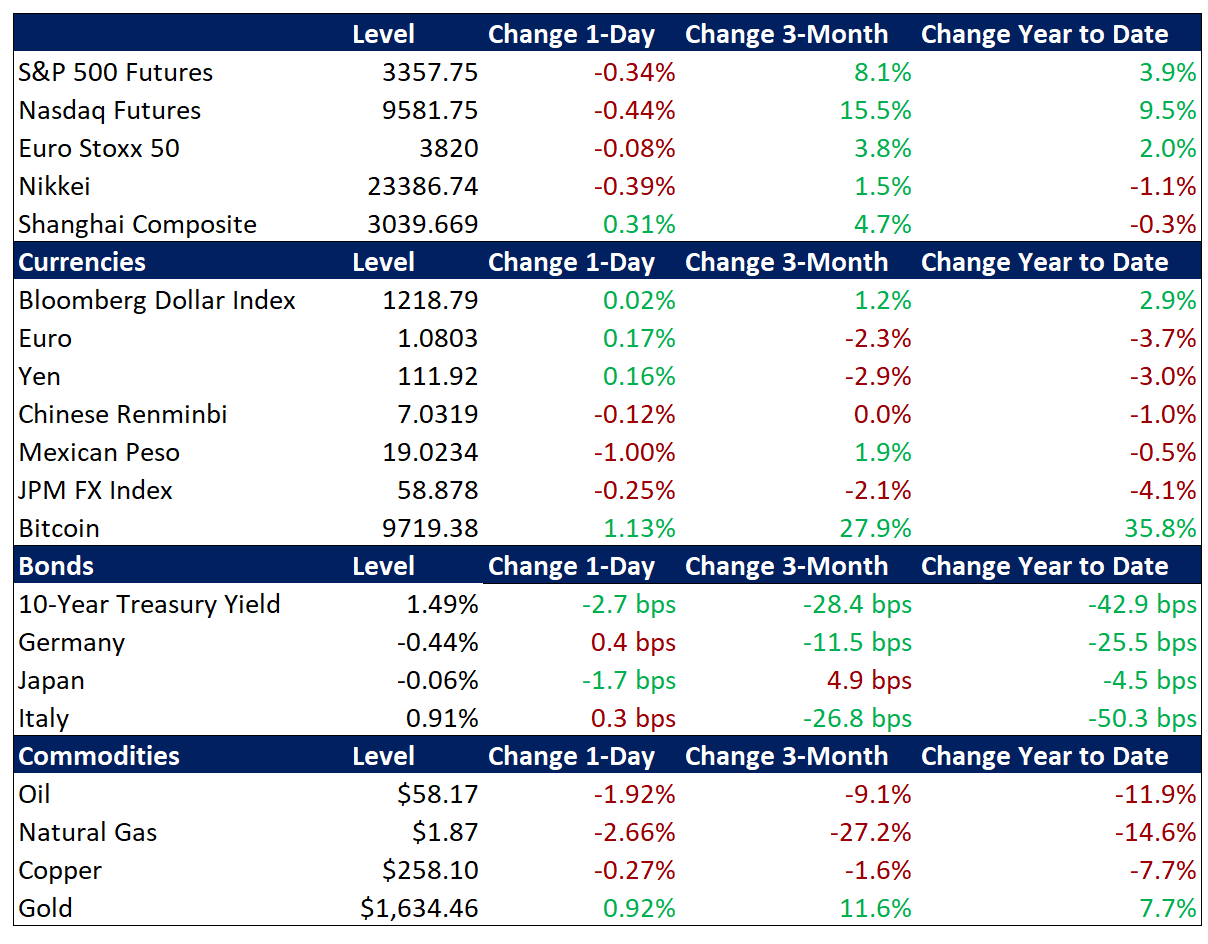 Swelling outbreak figures in South Korea and other neighboring countries are rekindling worries of a lengthier and deeper impact of the epidemic. Market participants are warily monitoring reports of an expanding outbreak in Beijing and South Korea, as well as new fatalities in Japan. Specifically, news from the South Korean city of Daegu indicates a jump in recorded infections, with identified cases in the country quadrupling in two days, and reports yesterday indicated a rapid spread of the virus through a Beijing hospital. Meanwhile, analysts are again raising questions about the credibility of the outbreak data in China after officials in Hubei province, the epicenter of the outbreak, shifted the diagnosis guidelines for a second time over the past two weeks yesterday, this time dramatically reducing the reported cases. Now, total infections are reported to be 76,775 while fatalities have reached 2,247. Meanwhile, the list of corporates reporting a significant impact on their business continues to grow, with Goldman Sachs suggesting that the likely impact on earnings has been broadly underestimated.

Preliminary readings of February’s manufacturing and service sector purchasing managers’ indexes (PMIs) showed a regional divergence suggestive of intensifying virus-related headwinds in Asia but steadiness for now in Europe and the UK. For context, PMI readings above 50 denote expansion in the sector. Australian PMIs showed contraction across the board, with manufacturing at 49.8, services at 48.4, and the composite reading at 48.3 versus January prints of 49.6, 50.6, and 50.2, respectively. Japan posted similarly downbeat figures, with manufacturing slowing from 48.8 to 47.6, services dropping from 51.0 to 46.7, and the composite PMI registering a steep contraction at 47.0 versus 50.1 the prior month. Meanwhile, the UK’s February PMIs surprised to the upside in factory activity, which posted 51.9, topping the estimate of 49.7 and January’s 50.0. UK services came in roughly as forecast at 53.3, which rendered a better-than-expected 53.3 composite PMI, matching January’s pace. EU PMIs were more subdued, with manufacturing at 49.1, services at 52.8, and the composite at 51.6, but all three gauges moderately outpaced consensus estimates and January’s readings. At a country level, Germany’s manufacturing PMI posted the most encouraging result, improving to 47.8 versus a projection of 44.8 and the prior reading of 45.3. These figures have helped pause the dollar rally for the moment, as the yen, euro, and pound stabilize after recent declines. Preliminary February PMIs for the US are due later this morning.

Treasury Markets Reflect Economic Concerns – Analysts are monitoring price action in Treasuries, as declining yields reflect surging safe haven demand and concerns over the economic outlook. The 10-year yield is now trading below 1.50%, barely above the all-time low of 1.47% registered during the global deflation scare of early 2016. Treasury yield curves (the yield spread between Treasuries of differing maturities) are also flattening, and in some cases inverted, which is considered a harbinger of impending recession. The most closely-watched portion of the yield curve, the 2-year/10-year segment, is only 12 basis points above inversion.

Looking Ahead – Next week’s calendar features some key economic data in the US, including January’s income and spending data, as well as the Fed’s preferred measure of inflation, the core personal consumption expenditure price index (core PCE). The Fed targets 2% year-on-year (y/y) for core PCE and the December reading remained barely above multi-month lows at 1.6%. Estimates are for a slight increase to 1.7% y/y. The second revision of fourth quarter US GDP is also due, with expectations of a slight upward tick to 2.2% from the initial 2.1% print.

The Fed is clearly hung up on what transpired in markets after that midsummer meeting. Minneapolis Fed President Kashkari said that the Fed was upset to see equities going higher...

Nick writes here "This time"... If the Fed is patting itself on the back because it made stocks go down after its September meeting, which is what this tweet suggests, then markets are right to take fright given that a major Fed policy blunder is increasingly likely.