Global risk assets are attempting to stabilize this morning as investors continue to grapple with concerns over the outbreak after the rapid spread of coronavirus cases outside China undermined hopes of swift containment. S&P 500 futures point to a 0.2% gain at the open after yesterday’s 3.4% plunge, which was the sharpest one-day loss in two years. Still, the index remains within 5% of last Wednesday’s latest record high. Apparently slowing infection rates around Wuhan had fueled optimism over the past few weeks but outbreaks beyond China, principally in South Korea, Japan, Italy, and Iran, have raised the risk that the virus becomes a pandemic and significantly hampers economic activity worldwide. Overnight, equities in Asia were mostly lower, with Japan posting catch-up losses after yesterday’s holiday, while EU stocks are moderately lower. Treasuries are sustaining their rally amid heightened demand for safe havens, with the 10-year yield near a record low at 1.37%. Meanwhile, the dollar is pausing its uptrend, with a closely-followed dollar index near multi-year highs. Crude oil prices are under pressure amid fears of declining demand, with Brent trading near $56 per barrel. 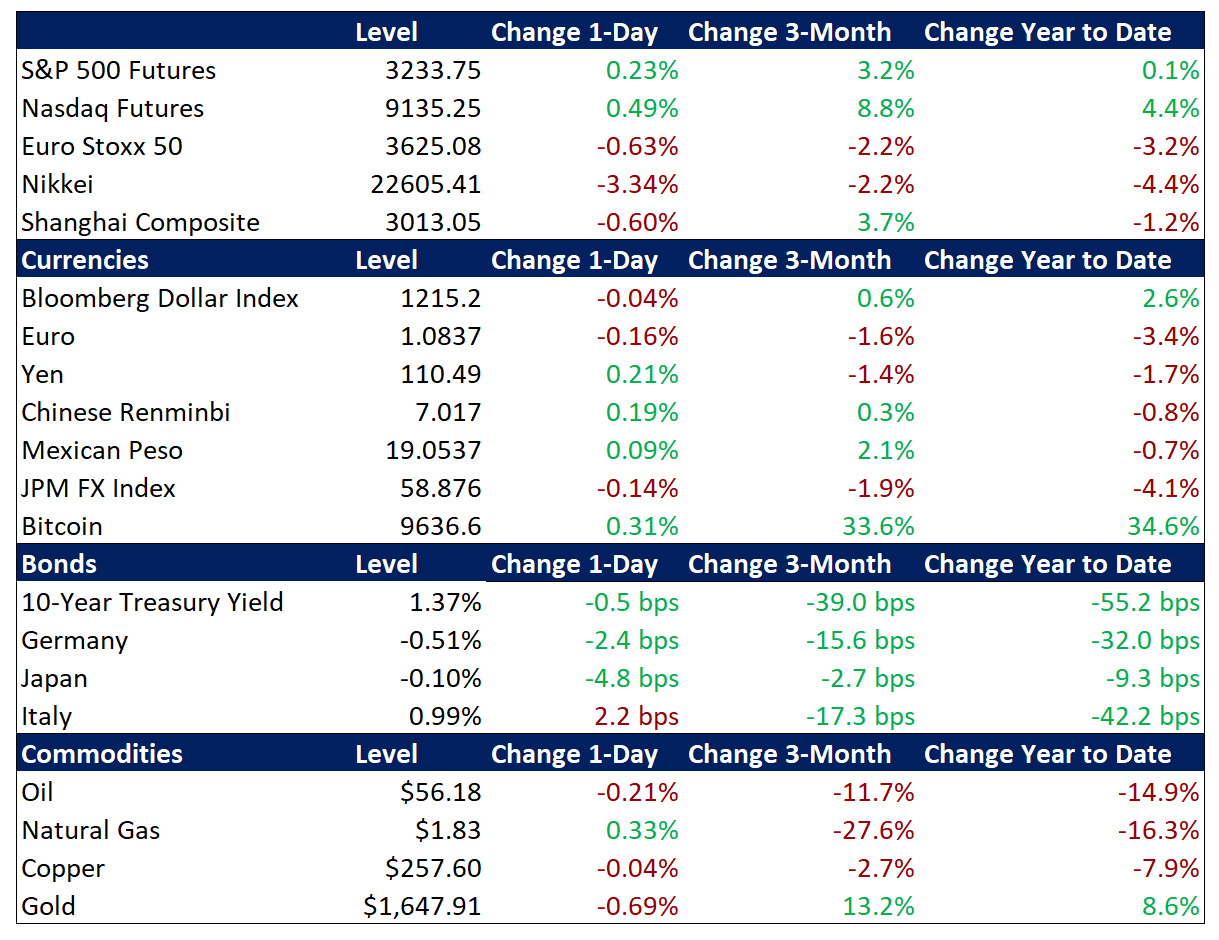 Swelling outbreak figures in Italy, Japan, South Korea, Iran, and other countries are forcing investors to confront the likelihood of a wider, lengthier, and deeper impact of the epidemic. Italian equities are 0.6% lower this morning after yesterday’s -5.4% swoon, and its sovereign bonds are continuing to underperform as the rising number of reported coronavirus cases in northern Italy and a spread to southern Italy keep pressure on local assets, while also impacting investor sentiment more broadly. Similar outbreaks in Japan, South Korea, and Iran, as well as reports of the spread to other countries, are dispelling optimism over the prospects for quick containment, which had lifted global equity markets over the past few weeks. Global public health officials are flagging the risk that the virus becomes a pandemic, with a spread to multiple continents that exerts a significant impact on society. More flight restrictions are being enacted, Hong Kong schools will remain closed for another month, and President Trump has requested a $2.5 billion budget from Congress to combat the epidemic. Now, total infections are reported to be 80,289 while fatalities have reached 2,704. Meanwhile, the list of corporates reporting a significant impact on their business continues to grow (more below).

Markets Reflect Varying Degrees of Anticipated Fallout from the Outbreak

Yesterday’s sharp losses for global equities moved stock markets into closer alignment with the more worrisome outlook that Treasuries, currencies, and commodities markets have been reflecting. Investors are pondering whether yesterday’s sharp losses in global equities mark a decisive breakdown of the prevailing resilience of stock markets in the face of heightened coronavirus concerns. However, major US equity indexes are only around 5% below record highs from earlier this month, levels that are consistent with a relatively upbeat containment scenario, and are set to rebound moderately this morning. Equity benchmarks in the EU, UK, and Japan are also barely below multi-year highs. For context, a standard equity market “correction” is loosely defined as a 10% decline from a recent peak, while a “bear market” is associated with sustained losses of over 20%. Meanwhile, the VIX gauge of US equity volatility is elevated at 23 but remains well shy of its most recent peaks in February and December of 2018, which topped 35. Still, equity investors are increasingly attuned to the worrisome signals from the Treasury market (more below) and are warily monitoring the increasing number of corporate profit warnings. Mastercard and United Airlines are among the most recent companies to downgrade their profit and/or sales forecasts.

Treasury Market Calls for Fed Easing – The 10-year Treasury yield is now trading at 1.37%, nearing the prior all-time intraday low of 1.32% registered during the global deflation scare of 2016. Treasury yield curves (the yield spread between Treasuries of differing maturities) are also flattening, and in some cases inverted, which is considered a warning of impending recession. Meanwhile, futures markets are pricing in more than two Fed rate cuts over the coming year and over 50% odds that the Fed starts lowering rates again by the April meeting. Yesterday, Minneapolis Fed President Kashkari and Cleveland Fed President Mester both noted economic risks associated with the outbreak but suggested that the FOMC should be patient with its policy response. Analysts will monitor Vice Chair Clarida’s remarks today for any signals that the bias is shifting toward more easing in the coming months.

Home Depot Earnings Highlight Tight US Housing Market – The home improvement giant topped earnings and revenue projections for last quarter and its key metric of same-store sales outpaced estimates at 5.2%. Management has suggested that a constrained supply of new homes benefits Home Depot as homeowners opt to make improvements rather than buy new.