Global risk assets are attempting to find their footing this morning as investors continue to grapple with concerns that the coronavirus is developing into a global pandemic. S&P 500 futures indicate a 0.1% higher open after a two-day plunge of 6.3% to start this week that has put the index 7.6% below last Wednesday’s latest record high. Rapidly expanding outbreaks outside of China, principally in South Korea, Japan, Italy, and Iran, have raised the risk that the virus will significantly hamper economic activity worldwide. Overnight, equities in Asia were broadly lower again, though losses were more moderate, while EU stocks are down less than 1%. Treasuries are steadying after their rally, driven by heightened safe haven demand and a darkening economic outlook, with the 10-year yield trading at 1.37% after briefly touching a record low yesterday. The dollar is resuming its uptrend, with a closely-followed dollar index turning back toward multi-year highs. Crude oil is down again, with Brent below $54 per barrel. 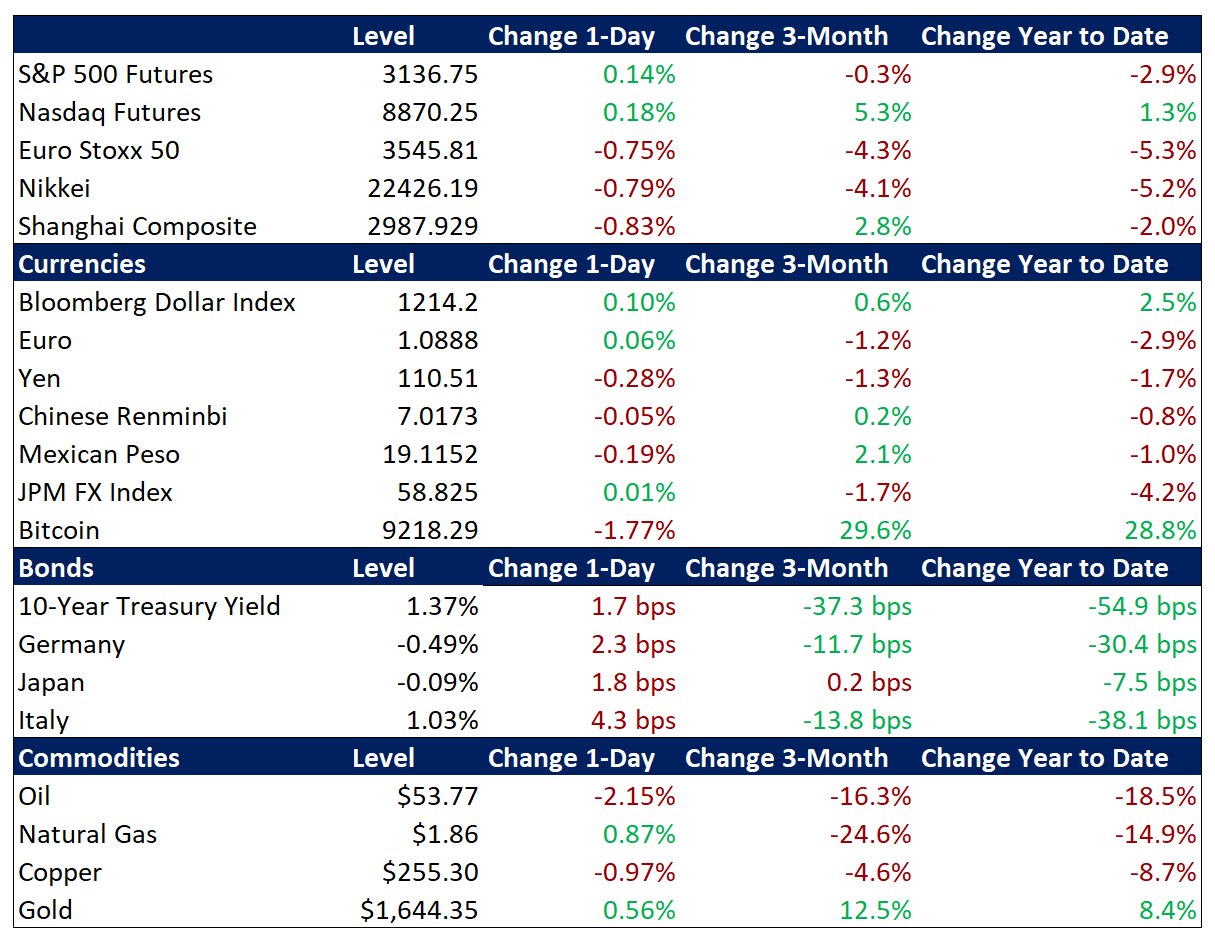 Health official predictions of an outbreak in the US deepened investor concerns yesterday, alongside rising infection totals in Italy, Japan, South Korea, Iran, and elsewhere. The latest developments are forcing investors to confront the likelihood of a wider, lengthier, and deeper impact of the epidemic, or even its expansion into a global pandemic. Rating agency Moody’s noted that a worldwide recession is likely in the event of a pandemic. Yesterday, the warning by the CDC that Americans should prepare for possible “community spread” of the coronavirus and the possibility of a “significant disruption to our lives” raised fears among investors, as did an apparently rising fatality rate among the infected outside China. Expanding quarantines and travel restricts for Italy, Japan, South Korea, and other countries have dispelled prior optimism over the prospects for quick containment, which had lifted global equity markets over the past few weeks. News out of China, however, has taken a more positive tone, with various provinces reducing their threat levels and reports of increasing manufacturing activity. Now, total infections are reported to be 81,172 while fatalities have reached 2,765.

Recent Fed communications have conveyed a steady policy stance but also registered concerns about the impact of the outbreak, while markets see rate cuts restarting in the coming months. Vice Chair Clarida’s remarks yesterday gave little indication that the bias of the FOMC is shifting toward more easing in the coming weeks and months, noting that it is “too soon” to estimate the possible fallout. Last night, Dallas Fed President Kaplan also suggested that it “pays to be patient” amid a high degree of uncertainty over the epidemic’s potential impact on growth. On Monday, Minneapolis Fed President Kashkari and Cleveland Fed President Mester both flagged economic risks associated with the outbreak but suggested that the FOMC should be patient with its policy response. Nevertheless, price action in Treasury markets is consistent with a dismal economic outlook and reflects a prompt return to easing by the Fed. The 10-year Treasury yield is now trading at 1.37% after yesterday briefly falling below the prior all-time intraday low of 1.32% registered during the global deflation scare of 2016. Treasury yield curves (the yield spread between Treasuries of differing maturities) remain flat, and in some cases inverted, which is considered a warning of impending recession. Meanwhile, futures markets are pricing in more than two Fed rate cuts over the coming year and nearly 70% odds that the Fed starts lowering rates again by the April meeting.

Overseas Stimulus to Support Growth – Germany is loosening its self-imposed fiscal straightjacket, China’s central bank is adding accommodation, and Hong Kong’s government is giving cash directly to its citizens in an attempt to cushion the economic impact of the virus.

Investors Ponder US Political Uncertainty – Against the disquieting backdrop of coronavirus outbreak news, US politics remains in focus. Some politically-minded market contacts have suggested that the recent sell-off in US equities may have an undertone of concern over the rise of Senator Sanders in the polls, given his relatively less market-friendly stance. However, shares of companies that have displayed political sensitivity in the past, such as managed care giant UnitedHealth Group, are not evidencing notably outsized losses in the most recent sell-off, suggesting that coronavirus concerns are the predominant downside catalyst this week.

US Housing Market Data Expected to Remain Robust – January new home sales figures, as well the last week’s mortgage applications data, are due today with both expected to reflect continued strength. This follows yesterday’s upside surprise in December home price gains. Analysts are citing the lack of supply on the market for rising prices and industry figures are blaming the lack of qualified workers as a bottleneck for homebuilding.