Global risk assets are extending yesterday’s rebound this morning as stabilization of mainland Chinese markets overnight lifts sentiment, as investors weigh concerns over the coronavirus outbreak against broadly supportive corporate earnings. S&P 500 futures point to a 1.2% gain at the open, which would halve the index’s current 2.4% downside from its record high earlier this month. As witnessed last week, investors are attempting to look past the impact of the viral outbreak emanating from central China but the general mood is cautious and volatility levels remain elevated. Overnight, equities in Asia took their cue from the recovery of the Shanghai Composite, which overcame early losses to gain 1.3% on the day (more below), and EU equities are posting similar upside. Treasuries are continuing to retrace a modest portion of their recent rally, which has been driven by safe haven demand, with the 10-year yield edging further above three-month lows at 1.57%. The dollar is flat as the renminbi steadied. Even beleaguered crude oil markets are posting some upside, though Brent remain near multi-month lows below $55 per barrel despite some indications of additional OPEC efforts to support prices. 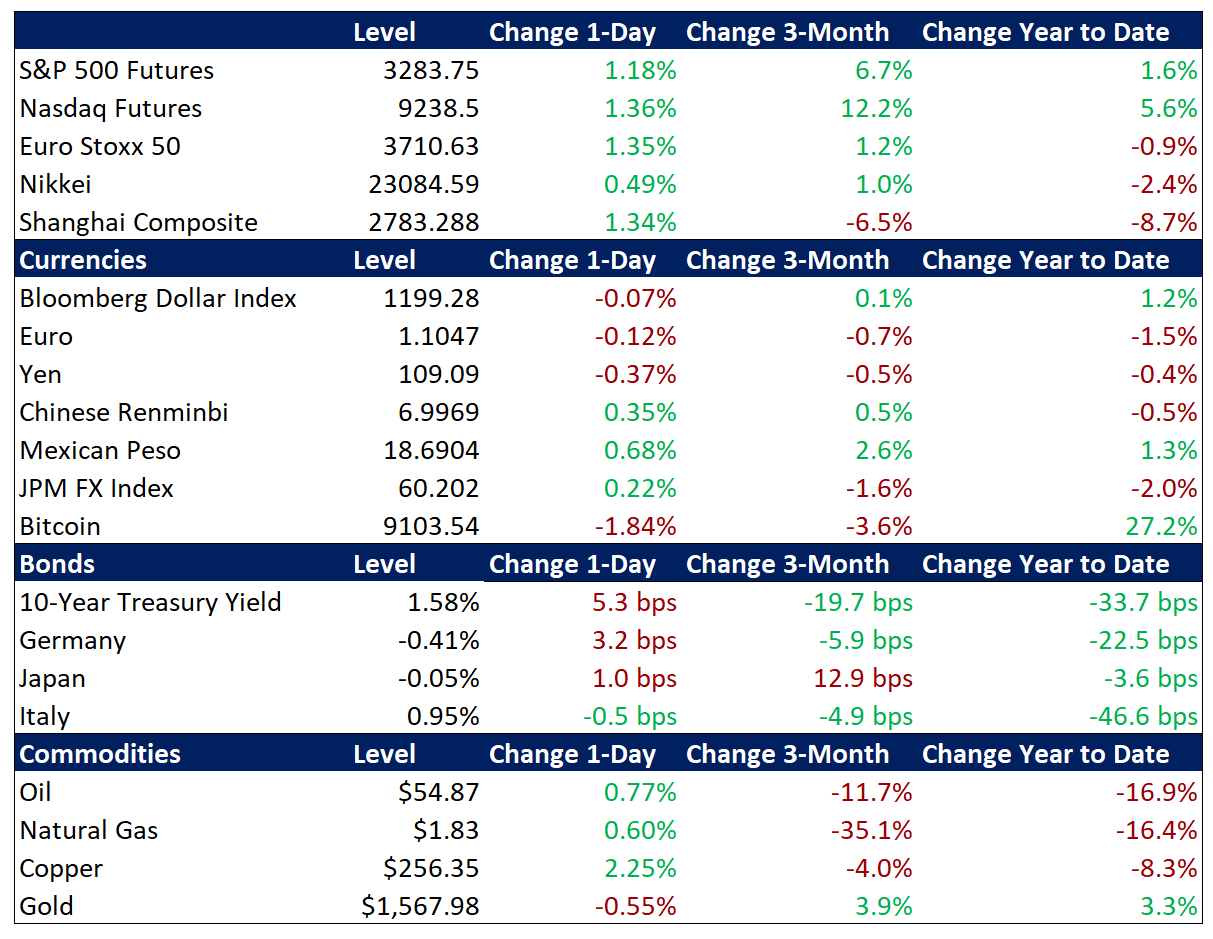 As investors continue to monitor the pace of the outbreak, risk asset upside is being fueled by hopes of responsiveness to antiviral drugs and last night’s rebound in mainland Chinese markets. The Shanghai Composite recovered from early losses after losing 7.7% yesterday in a volatile reopening after being closed for more than a week on an extended Lunar New Year holiday break. Official and unofficial state support is being credited with helping the index bounce back. Specifically, the People’s Bank of China injected liquidity for a second straight session after providing 1.2 trillion renminbi to domestic banks on Monday, alongside modest cuts of certain policy rates, a ban on short-selling stocks, and reports of major equity purchases by large state-owned insurance companies. The renminbi also retraced yesterday’s losses, appreciating past the closely-watched 7 to the dollar level. Still, virus-related headlines are keeping investors on edge, with reported infections rising to 20,679 and fatalities to 427, as more governments around the world impose travel restrictions on mainland China.

Although fourth quarter (4Q19) corporate reports generally continue to impress, Google joined Facebook in registering a rare downside surprise. Google topped earnings estimates but fell short of projected revenues in its 4Q report that followed yesterday’s closing bell, sending the IT giant’s stock price 3.8% lower in pre-market trading. Of the so-called FAANG stocks (Facebook, Amazon, Apple, Netflix, and Google), which together have accounted for a disproportionate amount of S&P 500 upside in recent years, results from both Facebook and Google for last quarter left analysts underwhelmed, while the others topped estimates. Meanwhile, ahead of its earnings report today, shares of Gilead Sciences rose 5.0% yesterday on news that the company is offering an experimental drug to treat the new coronavirus. The drug, called Remdesivir, is not licensed or approved in any country but is being used as emergency treatment in some cases. The company is working closely with the Chinese government to treat patients. Today also features reports from Ford, Disney, and ConocoPhillips. Of the 233 S&P 500 companies that have reported 4Q19 results, 75% have topped earnings expectations and 63% have beaten sales estimates. The rest of this final week of peak earnings reporting season includes reports from Aflac, Allstate, Prudential, Clorox, Chipotle, GM, MetLife, Qualcomm, Kellogg, Philip Morris, T-Mobile, Tyson Foods, and Twitter.

Traders Note Commerce Department Currency Rule – Yesterday, the US Commerce Department published a rule first proposed last spring that will allow the agency to apply tariffs to counteract the impact of undervalued currencies in response to complaints brought by individual US companies. There has been no immediate market reaction, and global currency volatility remains exceptionally subdued. Analysts are comparing this policy with the Treasury Department’s biannual foreign exchange report, which designates which countries are manipulating or on watch for manipulation of their currencies based on a mix of fixed criteria and official judgement, but provides little in the way of enforcement mechanisms. For context, China was designated a currency manipulator by the Treasury Department last August at the height of the US-China trade fight, but the designation was lifted in advance of the Phase One agreement signing and was never included in the official Treasury foreign exchange report.

US Politics Remain a Backburner Issue for Markets – Analysts are noting the ongoing confusion over the results of yesterday’s Democratic caucus in Iowa and will monitor tonight’s State of the Union address, but no discernable market reactions are expected. US politics are unlikely to be a significant driver of price action until closer to the election in November.