Global financial markets are staging a rebound this morning after yesterday’s dramatic declines in equities, oil prices, and Treasury yields, with investors’ focus shifting back to government stimulus efforts to counteract the widening human and economic toll of the coronavirus outbreak. S&P 500 futures indicate a 4.0% rebound at the open, which would retrace a meaningful portion of yesterday’s 7.6% plunge and pare the index’s year-to-date losses of 15.0%. This sharp back-and-forth price action continues the pattern from last week, as price action was driven by the waxing and waning of investor optimism over prospects for synchronized stimulus from global central banks and governments to counteract the economic costs of the coronavirus epidemic, though the start of an oil price war between Saudi and Russia over the weekend exacerbated yesterday’s volatility (more below). Equities in Asia and the EU posted gains overnight, while oil prices are partially retracing their crash of over 20% yesterday, with Brent crude bouncing above $37 per barrel. Meanwhile, Treasuries are giving back some of their torrid rally, with the 10-year yield recovering to 0.69%. Meanwhile, the dollar is rebounding amid expectations of fiscal stimulus. 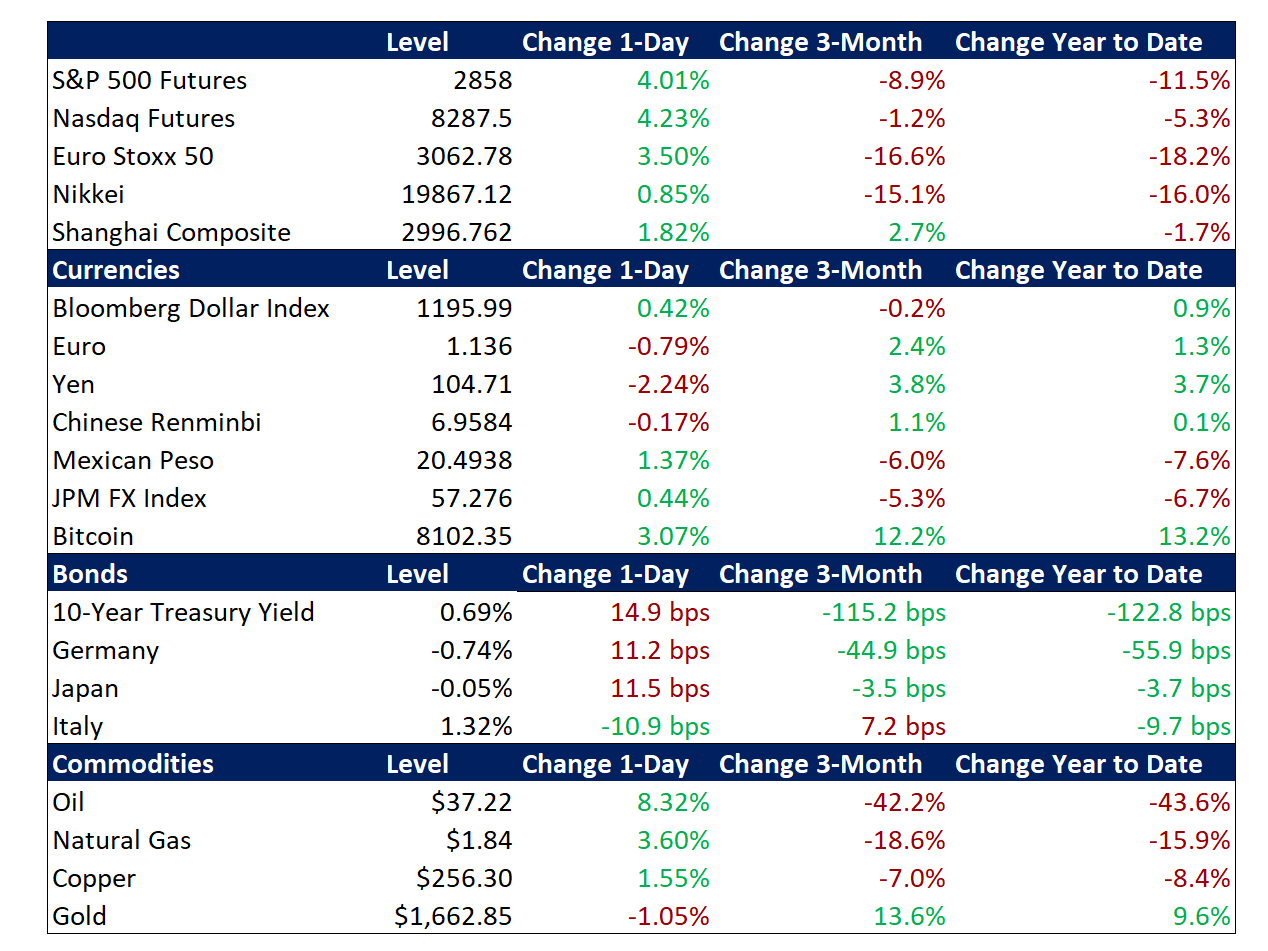 Investor Focus Shifts Back to Stimulus After Market Swoon

As markets attempt to stabilize following yesterday’s rout, investors are focusing on additional government stimulus measures to offset the economic impact of the virus and prevent disorderly price action. President Trump is preparing to announce “very dramatic” economic stimulus measures later today, with reports suggesting that the plan will feature payroll tax cuts, paid sick leave for hourly workers, and a concessionary small business loans program, but will not include specific support for airlines and other acutely impacted industries. Some top Republican Senators have expressed skepticism at the need to deploy more stimulus in the face of an uncertain economic impact of the virus, while key Democrats in the House are taking issue with the payroll tax cut. Though fiscal support is a key focus, given the expectation of diminished efficacy of monetary easing with rates already so low, the Fed is upping its liquidity injections into short-term funding markets and is reportedly set to announce an emergency lending facility to head off a potential credit crunch, while futures markets continue to price in steep interest rate cuts. Specifically, futures reflect 75 basis point (bps) of cuts by the March 18 Fed meeting, with around 100bps of total easing reflected by July. Some analysts project that rate cuts will be accompanied by the transformation of the ongoing asset purchase program into official quantitative easing.

Saudi and Russia continue to up the ante in their oil price feud as oil prices struggle to find a new equilibrium. Crude oil prices are staging a partial recovery from yesterday’s dramatic swoon, which took Brent crude prices nearly 30% lower to $31 per barrel at yesterday’s trough. Brent is up over 8% this morning to around $37 per barrel, which remains close to four-year lows. Analysts suggest that prices will struggle to find upside, as Saudi Aramco overnight announced that it would target a record 12.3 million barrels per day (bpd) of production in April, which is even higher than the initial reports, representing a 25% increase from current levels following a 9.7 million bpd pace in February. Russia, for its part, has threatened an extra 500k bpd supply increase, which would put production at 11.8 million bpd, which is also a record. Nevertheless, Russia’s oil minister stated that another meeting with OPEC might be possible as early as May or June. The US Department of Energy decried the price war as an attempt to “manipulate and shock oil markets.” For context, last week’s OPEC summit ended in acrimony as the cartel failed to secure cooperation from Russia for a 500k barrels per day (bpd) reduction from non-OPEC producers to augment their additional 1 million bpd output curb.

Stimulus Measures Ramp Up in EU and Asia – Italy is preparing a $10 billion spending package and will offer tax credits to hard-hit companies as the EU provides fiscal leeway to the indebted country. Also, the Bank of Japan is mulling expansion of its ETF buying program and the government is marshalling a $15.6 billion anti-virus budget. Lastly, the European Central Bank is expected to cut rates and augment its bond buying program at its meeting on Thursday.

Oil Price Shock Reverberates in US Equities and Credit – An ETF of US energy company stocks fell 20.1% in yesterday’s trading and spreads on high yield energy credits widened to a four-year peak but remain shy of the worst levels from the 2016 oil price crash. For context, the traditional benefits of lower oil prices to the US economy now are counterbalanced by the impact on the shale oil industry and the regions dependent on it, as well as the attendant stress on producer creditworthiness, which in turn pressures the high yield debt market, leveraged loans, and regional banks in particular.