Global financial markets are relapsing to the downside this morning as investors ponder whether even the radical stimulus and support measures being enacted by central banks and governments will be sufficient to counteract the unprecedented economic fallout from the pandemic. S&P 500 futures are under pressure and point to a retracement of yesterday’s 6.0% rally, triggering another “circuit breaker” trading halt. The index is struggling to rebound even after shedding 12.0% on Monday, the worst percentage point loss since “Black Monday” in 1987. Amid wild swings over the past week, the S&P 500 is down 21.7% on the year, and 25.3% below its mid-February record high, as investors come to grips with the unprecedented ramifications of the pandemic and question the potential for government measures to counterbalance the multifaceted economic and financial impact. EU equities are down nearly 6% while Asian stocks posted more moderate downside overnight. Prospects for muscular fiscal stimulus are pushing Treasury yields higher, with the 10-year yield above the key 1.00% level, but EU sovereign bond markets are selling off in a less orderly manner (more below). Meanwhile, the dollar continues to march to multi-year highs. Lastly, oil prices are continuing their swoon, with international benchmark Brent crude sinking below $28 per barrel.

With policymakers enacting ever more radical measures to confront the interlocking public health, economic, and financial crises brought on by the pandemic, investors are grappling with questions over the sufficiency, as well as the potential side-effects, of such policies. Monday’s panicky price action, even after powerful easing on Sunday evening by the Federal Reserve, shifted the onus back to the Trump administration and Congress, as investors confront the fact that broad swaths of the US economy, businesses and workers alike, will need direct and significant financial support from the government to make it through the coming weeks and months. In response, the Trump administration stepped up its efforts on the fiscal front yesterday (“going big”), with Treasury Secretary Mnuchin urging the Senate to quickly pass the emergency spending bill that he hammered out with House Speaker Pelosi last week and outlining the basics of a massive follow-up package. Mnuchin indicated that this third stimulus bill would feature up to $1.2 trillion in spending, encompassing “checks to Americans… in the next two weeks,” assistance for small and medium sized businesses, and liquidity for impacted industries, alongside $300 billion in tax payment deferrals as the April 15 deadline is pushed back for three months. Mnuchin downplayed concerns over the ballooning federal deficit and reportedly warned Republican lawmakers that unemployment could reach 20% in the absence of fiscal countermeasures. Meanwhile, analysts are noting a leaked US government report suggesting that the pandemic response could last 18 months and may require direct intervention in private sector by the executive branch, which is authorized during wartime conditions. While the US Treasury market appears to be absorbing the prospect of enormously increased supply, investors are noting dislocations in EU sovereign bond markets overnight, with sharp selloffs in the periphery, particularly Italy, but also in safe have German bunds. The European Central Bank is reportedly intervening to calm Italian bond market this morning.

Some Easing of Systemic Stress Signals Amid Forceful Fed Moves

With the Federal Reserve enacting increasingly muscular liquidity programs, analysts are noting signs of selective improvement. After the extraordinary easing announced on Sunday night, including a steep rate cut and a return to quantitative easing (large scale asset purchases), the Fed has continued to activate crisis-fighting programs. Yesterday, it upped liquidity injections into short-term funding markets, announced support measures for the commercial paper market (with backing from the Treasury), and activated a lending program for primary dealers, accepting a wide range of collateral for the loans. Analysts are noting positive effects in US short-term funding markets, although repo rates remain choppy, and signs of interbank pressures and overseas dollar scarcity have moderated. However, credit markets remain consistent with a broad and worsening solvency crisis, and the commercial paper (CP) market is also experiencing continued stress despite Fed intervention.

Increasingly Evident Economic Fallout from the Outbreak – In Germany, the ZEW Economic Sentiment Index plunged by 58.2 points to -49.5 in March, the lowest level since December 2011. Meanwhile, US February retail sales dropped 0.5% month-on-month (m/m), which was the largest decline in sales since December 2018. Economists expect a worldwide recession.

Boeing and US Airlines Request Government Support – An industry group has put forth a suggestion for up to $58 billion in aid and Boeing is seeking $60 billion in government support. 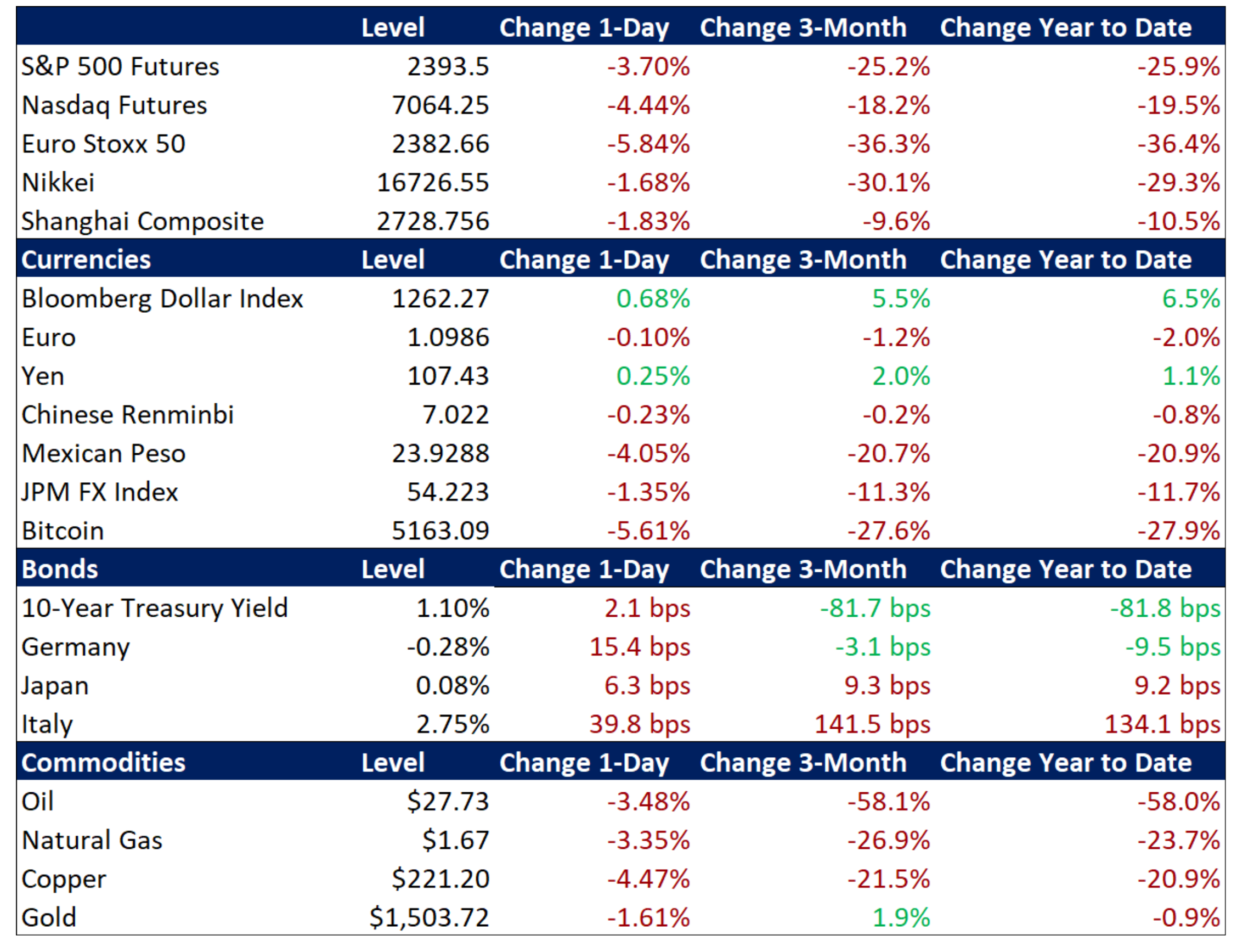