Global financial markets have fluctuated sharply overnight as US and EU central banks enacted even more forceful stimulus and support measures to quell the immediate market panic, though investors remain focused on the need for fiscal efforts to address the unprecedented economic fallout from the pandemic over the coming months. S&P 500 futures point to a 1.5% loss at the open, which represents only a moderate decline in the context of recent weeks but follows a swing of 8 percentage points overnight between solid gains to steep losses. Amid wild swings over the past week, the S&P 500 is down 25.8% on the year, and 29.2% below its mid-February record high. EU equities are only slightly lower this morning while Asian stocks registered another session of moderate downside overnight. Treasury yields are slightly lower, with the 10-year yield at 1.14%, while EU sovereign bond markets are rallying after the European Central Bank’s muscular actions last evening (more below). Meanwhile, the dollar continues to march to multi-year highs. Lastly, oil prices are retracing some of yesterday’s plunge, with Brent crude climbing above $26 per barrel.

Policymakers have been forced to take increasingly radical steps this week to confront the interlocking public health, economic, and financial crises brought on by the pandemic, with the European Central Bank (ECB) and Federal Reserve stepping in again last night to address rising systemic risks. After intervening in bond markets yesterday to stem the rout in Italian debt, the ECB announced overnight a €750 billion Pandemic Emergency Purchase Program (PEPP), with ECB President Lagarde stating that there are “no limits” to their commitment to steady EU financial markets, echoing her predecessor Mario Draghi’s “whatever it takes” stance that helped quell the EU debt crisis in 2012. The PEPP greatly ups the ECB’s firepower after last week’s €150 billion expansion and Lagarde’s seemingly reluctant tone underwhelmed market participants. The PEPP will not be bound by the same strictures as prior ECB quantitative easing programs, with Greek debt being eligible alongside other loosened restraints. Later in the evening, the Fed announced the Money Market Mutual Fund Liquidity Facility, to help ease the stress of spiking redemption demands in these vital segments of the financial market. This follows deployment of support programs for commercial paper markets and primary dealers.

While central banks work to counter the immediate systemic financial shocks, governments are scrambling to enact fiscal support measures that will keep their economies on life support through the coming weeks and months of pandemic lockdown. The Trump administration has stepped up its efforts on the fiscal front this week (“going big”), with Treasury Secretary Mnuchin outlining the basics of a massive follow-up package to the emergency spending bill that he hammered out with House Speaker Pelosi last week, which the Senate passed yesterday afternoon. This third stimulus bill is set feature up to $1.3 trillion in spending, encompassing direct payments for households, assistance for small and medium sized businesses, and liquidity for impacted industries, alongside $300 billion in tax payment deferrals as the April 15 deadline is pushed back for three months. Mnuchin dismissed concerns over the ballooning federal deficit though some analysts warned that Treasuries and other sovereign bond markets might react adversely to the coming flood of supply. Also, National Economic Council Director Kudlow indicated that the US government might eventually consider taking equity stakes in companies in need of support. Meanwhile, Berlin’s reluctance to deploy its fiscal headroom is now giving way, as the government readies a package of €550 billion to support Germany’s economy.

Economists Brace for Spike in US Unemployment Claims – With economic data around the world beginning to show the intensifying impact of the pandemic, analysts are pointing to US initial jobless claims for last week as potentially an early indicator of mass layoffs that anecdotal evidence suggests may have already begun. Also, a survey of German business confidence sank to is worst level in a decade. This comes as major Wall Street banks continue to downgrade their economic outlooks, with a global recession now a “base case” for a number of them, while the second quarter is at risk of registering a “depression” level plunge in growth.

Oil Steadying Near Almost 20-year Lows – Oil prices plummeted to around 18-year lows yesterday, with the deepening sell-off being driven by fears that the coronavirus will result in a global recession and massively decrease demand for crude, compounded by the continuing price war between Saudi Arabia and Russia. The oil price slide is also being felt in the high-yield market, with an ETF of so-called “junk” bonds falling to its worst level since spring of 2009. Energy companies are among the biggest issuers of junk bonds, accounting for more than 11% of the market. 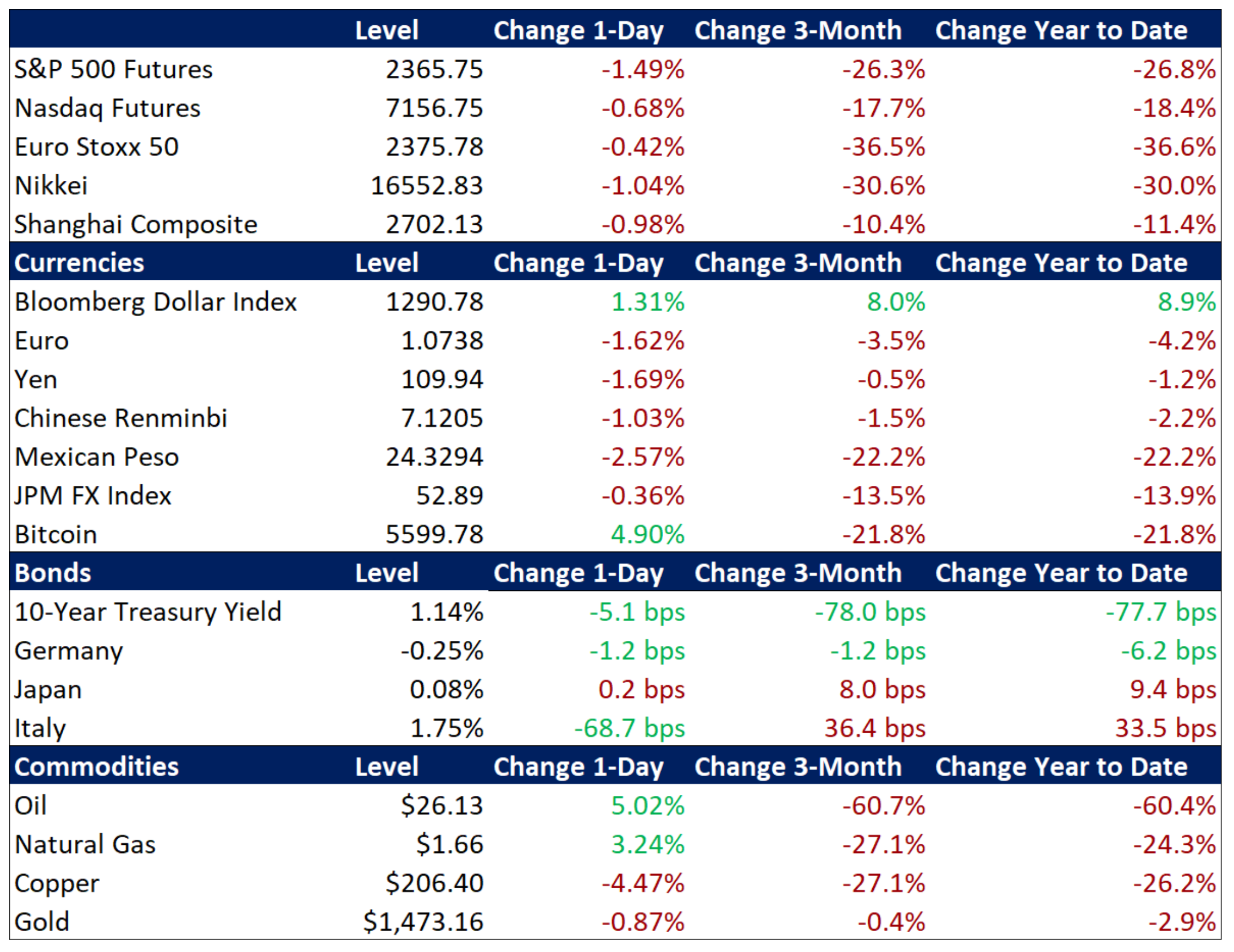