Global risk assets are mixed this morning as the ongoing US stock rally pauses to digest Fed communications ahead of more consequential earnings this week. S&P 500 futures are indicating a 0.2% lower open after the index rose 4.3% last week, building on monthly gains and bringing its year-to-date performance to -13.3%, while the Nasdaq also increased 4.7%, reducing year-to-date losses to 20.8%. EU equities are posting solid gains, and Asian stocks were broadly higher overnight. Longer-dated Treasury yields are flat after last week’s decline, with the 10-year yield holding at 2.65%, while the growth-sensitive yield curve remains deeply inverted, which is a classic recession signal. The broad dollar index is continuing to settle below mid-July’s multi-year peak, which was around its early pandemic high. Oil prices are turning lower ahead of this week’s OPEC+ meeting, with Brent crude sliding back toward $102 per barrel. – MPP upgrades US equities / downgrades the dollar: Our base case for topping inflation and slowing (but not crashing) growth with a downshifting Fed is the recipe for a second half 2022 tradable risk asset rally. With this past week’s developments increasingly aligning with this view, **we are upgrading stocks from neutral to 70% overweight and downgrading the dollar to a tactical sell, though we are still neutral on the Treasury market and curve. ** We still believe that summer markets will be choppy, and we just had a very positive week and a meaningful July rally, hence we are leaving some headroom to go further overweight if upside catalysts, like peaking CPI figures, materialize between now and the September FOMC decision.  If this is an ordinary market cycle, then we would probably also assume that the bottom of this bear market is nearly in place. Our longer-term outlook, however, centers on the view that a second half 2022 relief rally will run into challenging realities in 2023, as the Fed is unable to cut rates in the face of persistently elevated energy prices and fears of backsliding in their inflation fight.

After last week’s jumbo rate hike by the FOMC was balanced by signs of increasing sensitivity to slowing growth and hints of a potential deceleration in the pace of rate hikes over the coming meetings, Minneapolis Fed President Kashkari struck a hawkish posture in his Sunday interview. On CBS’s Face the Nation yesterday, Kashkari reiterated that the Fed is “committed to bringing inflation down” and that they are “a long way away from achieving and economy that is back at 2% inflation.” This comes after Fed Chair Powell’s post-meeting press conference was taken by market participants as opening the door to a slower pace of hikes, after the Committee upped the policy rate by 150 basis points (bps) over the past two meetings. Though Powell indicated that another 75bps is certainly on the table for the September 21 decision, the data between now and that meeting would provide direction. Kashkari, like Powell, downplayed the characterization of the US economy in recession but acknowledged that suppressing inflation may come at the price of growth contraction. Futures markets are now pricing in an additional 100bps of tightening through year end, with 50bps seen as the most likely outcome in September and two more 25bps hikes in November and December, respectively, but that being the top of the cycle, with rate cuts priced in by spring 2023. – MPP view: We understand that Fed officials want to rhetorically push back on building market optimism, as it works counter to their objective of tightening financial conditions. But we think that evidence will continue to build that an inflation peak will occur in the second half of the year, given all the signs pointing in that direction over the past couple of months. Fed rate hike assumptions had been contemplating 150bps over the July and September meetings and 3.75% by year-end, a level consistent with the terminal median rate in 2023 according to the FOMC projections (the dot plot) published at the June meeting, but we have anticipating that the Fed would move more gradually and futures markets have been shifting toward our view.

According to futures, the Fed is now seen being more likely to end the year at 3.50%, or below, with maybe 100bps of tightening over the next three meetings (Sept 21, Nov 2, Dec 14). We think there is still room for this to come down as easing growth and topping inflation allows for a more balanced FOMC policy posture.

The tone of second quarter (Q2) earnings season has turned increasingly positive and supportive of stocks after Amazon, Apple, and Microsoft all topped estimates last week, buoying equities to their best week since November 2020. Shares of Apple rose 5.5% last week after the tech giant’s Q2 figures, which it released after Thursday’s closing bell, topped revenue and earnings estimates. The key category of iPhone sales outperformed projections and CEO Tim Cook touted “our resilience and our optimism” in the face of a “cocktail of headwinds.” Amazon also issued impressive Q2 results on Thursday evening, handily topping revenue expectations, sending its share price 10.2% higher last week. The upbeat Q2 figures were accompanied by encouraging guidance for the coming quarter of as much as 17% revenue growth. Lastly, Microsoft posted similarly impressive sales for the quarter, which propelled its stock 7.8% higher last week. Big Oil also outperformed last week, with Exxon Mobil and Chevron shares soaring 11.4% and 13.6%, respectively, last week as the pair registered new record profits.

On the negative side, Facebook, Qualcomm and Intel saw their shares sink 6.0%, 5.6%, and 7.4%, respectively, after issuing disappointing results and sober guidance.

This week’s earnings calendar features less prominent companies but a heavy concentration of reports from diverse industries, with results from Aflac, Caterpillar, Cigna, ConocoPhillips, CVS Health, Electronic Arts, Eli Lily, Lyft, Marathon Petroleum, Marriott, MetLife, PayPal, Prudential, Starbucks, and Yum! Brands. Of the 280 S&P 500 companies that have reported thus far, 61% have topped sales expectations while 73% have beaten earnings projections, which are somewhat lower than recent levels though equity price reactions have tended to be positive if somewhat uneven. – MPP view: We had expected more mixed results from the tech majors but this week’s encouraging releases from Google, Amazon, Apple, and Microsoft have tipped the scales toward this being a supportive earnings season for stocks in the face of grim expectations.

Downbeat Chinese Purchasing Managers’ Indexes (PMIs) – China’s official PMI composite metric slid from 54.1 to 53.5 in July, with the manufacturing gauge sliding into contraction at 49.0 versus expectations of a tepid but stable 50.3 after June’s 50.2. For context, PMIs above 50 denote expansion in the sector. The service PMI was better but also slightly missed expectations and declined from the prior month’s 54.7 to 53.8. The privately-compiled Caixin manufacturing PMI was modestly better at 50.4 but also undershot the consensus forecast of 51.5 and June’s 51.7. The renminbi slipped 0.2% versus the dollar overnight but remains rangebound around its weakest level since fall of 2020.

Uncertainty Over Speaker Pelosi’s Taiwan Trip – Taiwan equities lagged the region but registered only modest losses, while the Taiwan dollar dipped to its weakest level versus the dollar since May 2020 amid confusion over Speaker Pelosi’s upcoming Asia trip itinerary. Her trip schedule that was published last evening made no specific mention of Taiwan, but reports this morning citing US and Taiwanese officials indicate that she is expected to visit the island sometime this week. For context, the planned trip has been met with discomfort by the White House and furious opposition from Beijing. Chinese officials have suggested a possible military response to what they would consider a hostile act.

Latest Macrocast: Breaking Down the Fed’s Big Week with Howard Schneider – On today’s Macrocast, Tony, John, and Brendan welcome Howard Schneider, Federal Reserve reporter at Thomson Reuters, to the show. As an expert on all things Fed and monetary policy, Howard breaks down the Fed’s latest rate hike and inflation’s impact on food consumption. Plus, the group analyzes the concerning PCE and GDP data released this week. Tune in here! https://marketspolicy.com/podcast-2/

Macrocast Special: A Conversation with Megan Greene on the Anti-Inflation Toolkit – In this special edition of the Macrocast, Tony and John welcome Megan Greene, Harvard Kennedy School Senior Fellow and Kroll Institute Global Chief Economist, to the show. Megan expands on her recent column in the Financial Times, where she makes an important point few pundits have acknowledged: There’s not much policymakers outside the Federal Reserve can do about inflation. The group walks through various policy responses to inflation and the supply- and demand-driven forces behind rising prices. Plus, the group discusses energy prices, the methodology for measuring inflation, and more. Tune in here! https://marketspolicy.com/podcast-2/

Read Megan’s bio and check out her site here.

Looking Ahead – This week’s macro calendar features the US nonfarm payroll figures for July, which is expected to reflect continued resilience in the US labor market with 250k jobs and steady unemployment at 3.6%. Other notable data includes global Purchasing Managers’ Indexes (PMIs), EU and Australian retail sales, German factory orders and industrial production, and Turkish inflation figures. The Bank of England and Reserve Bank of Australia have decisions. OPEC+ conducts its monthly meeting on supply curbs and earnings reporting season continues with an array of industry bellwethers reporting (see above). 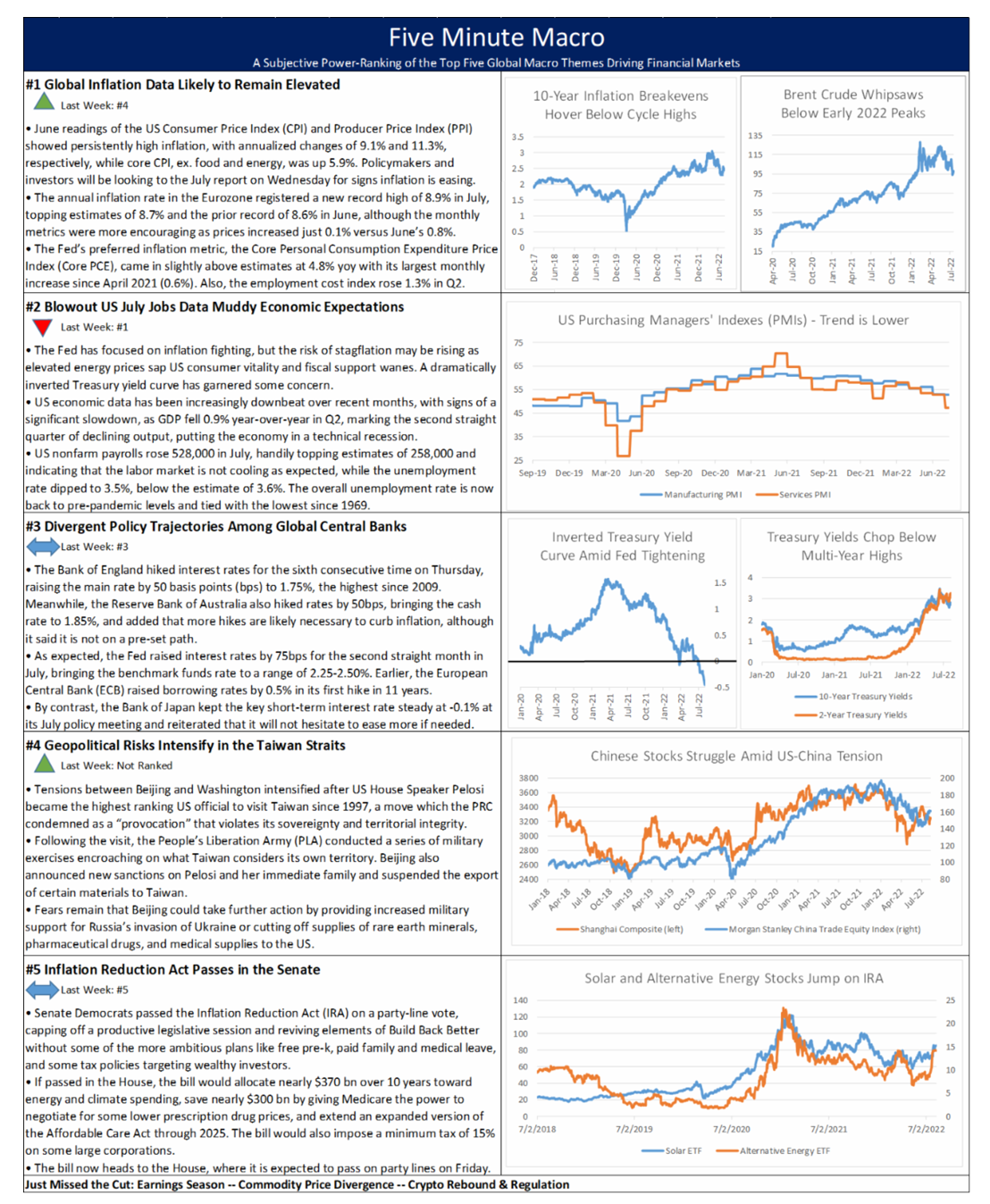 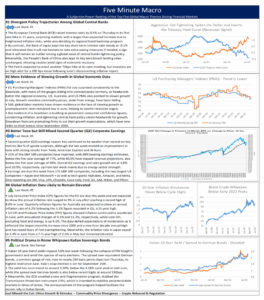 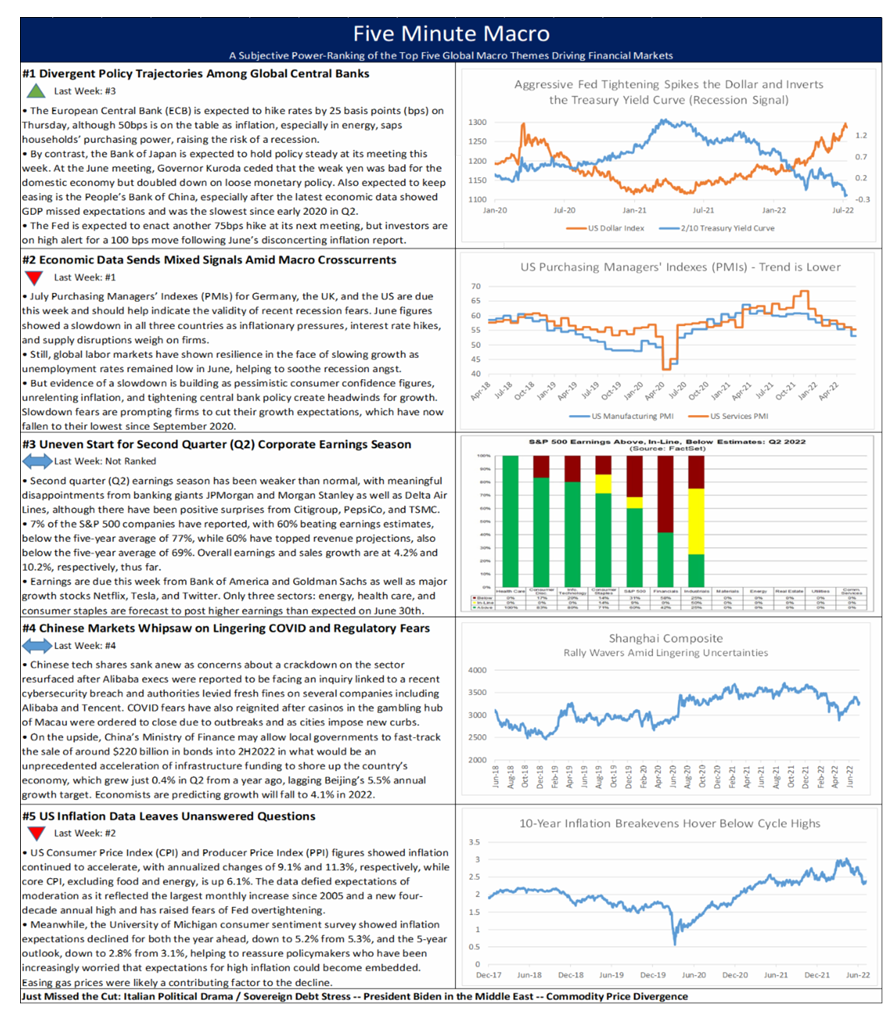 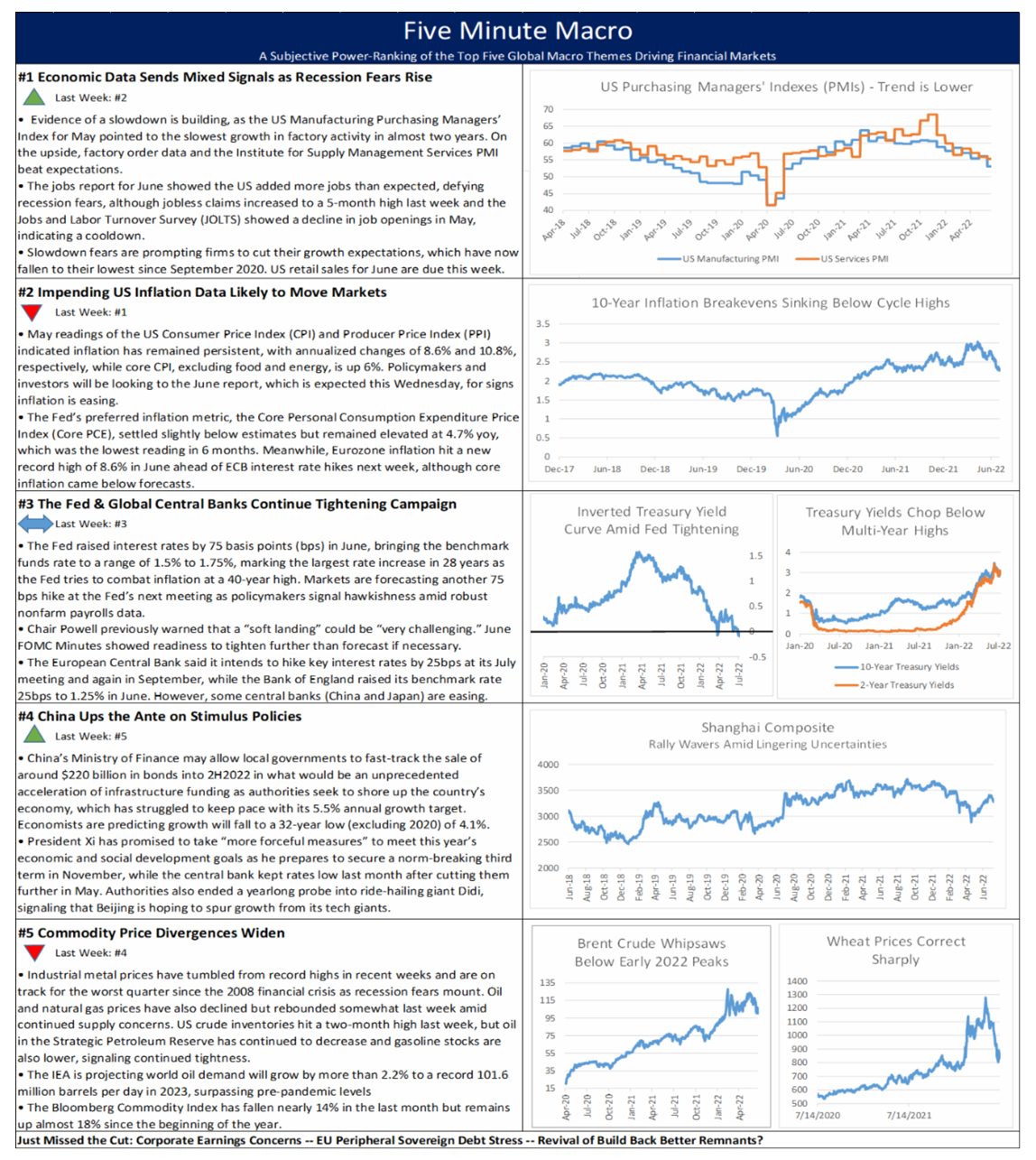 US and EU inflation data remains in the spotlight and economic data sends mixed messages on the recession front. The Fed and other central banks continue their tightening campaigns which has seen commodity prices fall and finally, questions of China’s stimulus reemerge. 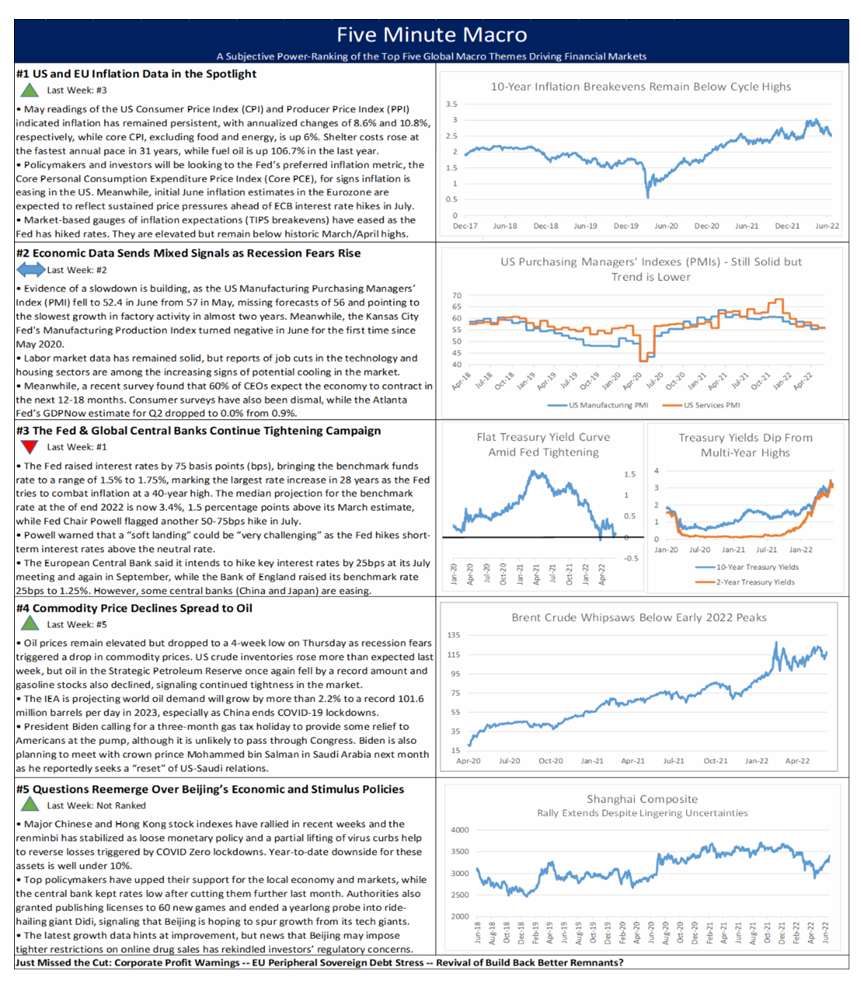 Continued high inflation and hawkish central banks continue to roil markets. Growth concerns moves up the list while high oil prices and lack of supply move down a spot. Finally, crypto markets are plummeting as regulation ramps up. 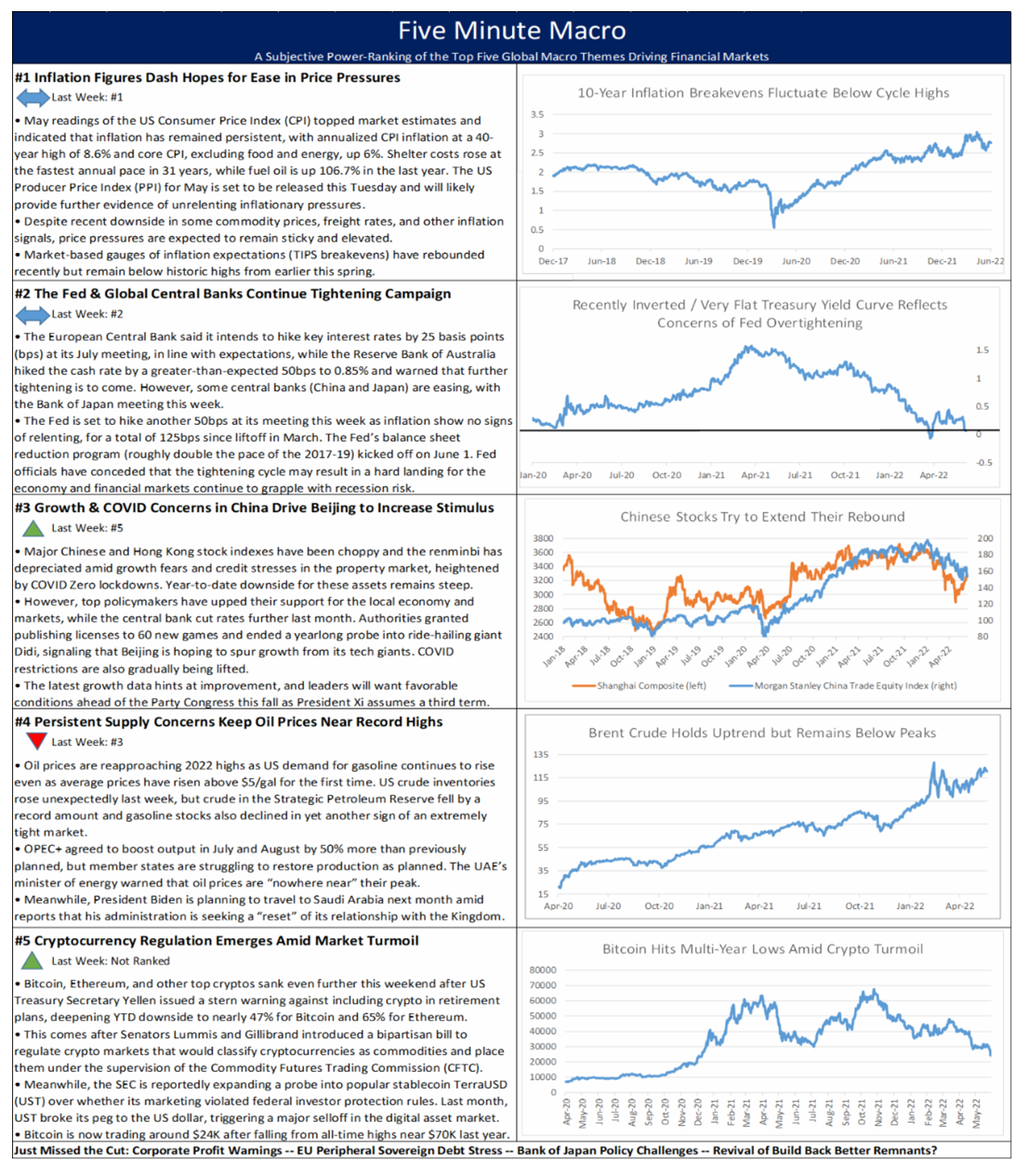 Markets wait for the May CPI report on Friday as global central banks talk tough on inflation and supply concerns keeps oil well above $100 a barrel. While recent data has been strong, forecasts are getting darker, and finally China rapidly reopens from Covid lockdowns. 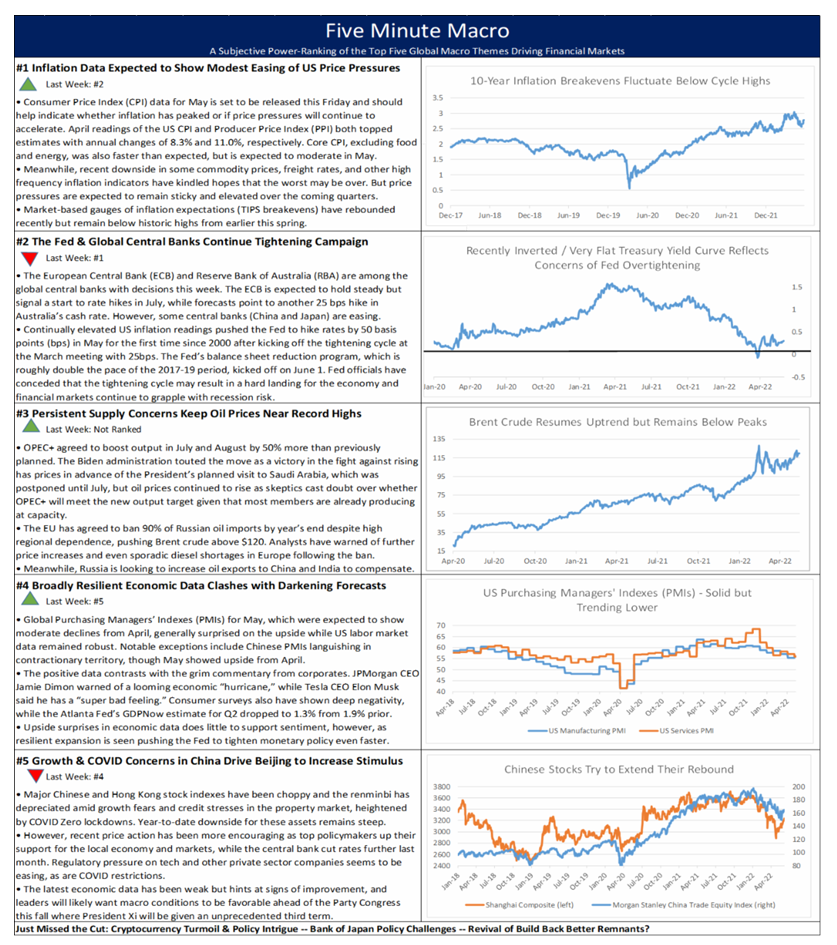 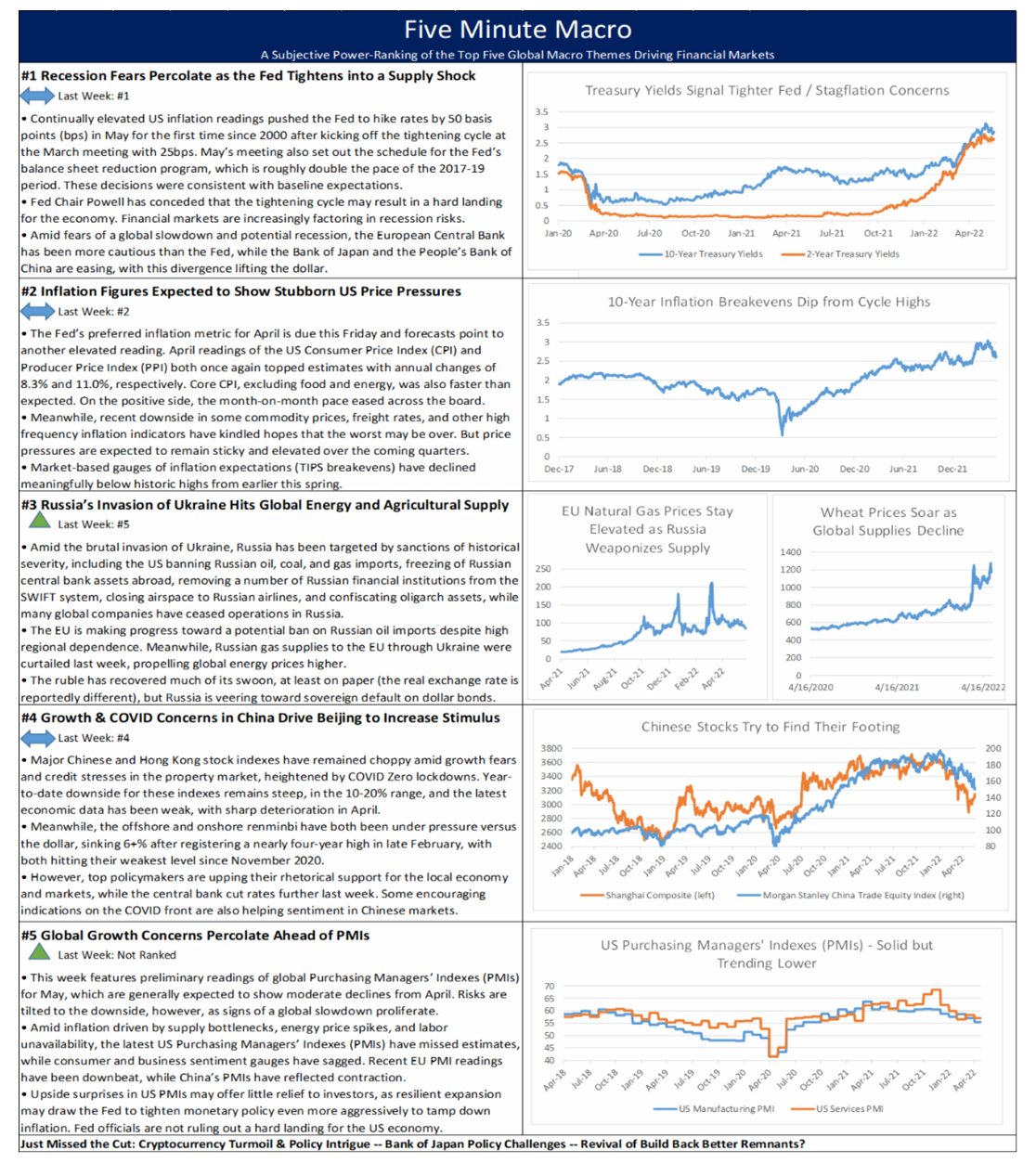 Join us for a live interview with John Linehan of T Rowe Price Monday afternoon. John is Portfolio Manager of the Equity Income Fund and will discuss tenets of Value Investing. Sign up here: https://lp.constantcontactpages.com/su/6t8vSiQ/LinehanInterview

Listen to the One River investment strategies that make their firm so successful at:https://www.youtube.com/watch?v=sxO9jfc2Ycg&t=500s
We interviewed firm President Bea who also discussed crypto investing priorities.

Join our Live Discussion with @SebastianBea- Nov 28, 4:45pmET. (https://conta.cc/3tX5jok) President of One River Digital (ORD) will dive into ORD strategies for traditional and digital asset investing and what sophisticated investors are saying. @cryptomondaysCT

This is why Lyn Alden is one of the most important people to follow for understanding the future of blockchain-based solutions to real world problems. A MUST READ! @LynAldenContact

See David Rosenberg's latest articulate explanation of what the Fed is really after given that even they know inflation has peaked. Video here https://www.youtube.com/watch?v=GGqJDiTqQIk&t=17s and sign up for his research here: https://bit.ly/3TOG3uM