Global financial markets are attempting to stabilize this morning after historic levels of volatility this week began to translate into more disorderly trading conditions and rapidly rising systemic risks, prompting an increasingly proactive response from central banks, though fiscal measures, particularly in the US and Germany, remain lacking. S&P 500 futures point to a 4.4% jump at the open, though this is dwarfed by yesterday’s plunge of 9.5%, which was the heaviest percentage point decline for the index since “Black Monday” in 1987. The index’s year-to-date losses stand at 23.2% while the downside from the mid-February record high is 26.7%. For context, investor optimism over prospects for synchronized stimulus from global central banks and governments to counteract the economic costs of the coronavirus epidemic evaporated yesterday as wrangling continued over US fiscal support and central bank action failed to support broad investor confidence. But nerves are steadying a bit this morning as headlines suggest that Congress and the administration may be closing in on an emergency spending deal today, while investors are focused on potentially dramatic stimulus from the Fed at their meeting next week, if not before. Equities in Asia posted steep losses overnight but today’s equity rebound began this morning in the EU. After the Fed stepped in yesterday to address some trading dislocations in Treasuries, the 10-year yield is up to 0.86%, and the dollar is hovering near top of its recent trading range. Brent crude is bouncing to $35 per barrel. 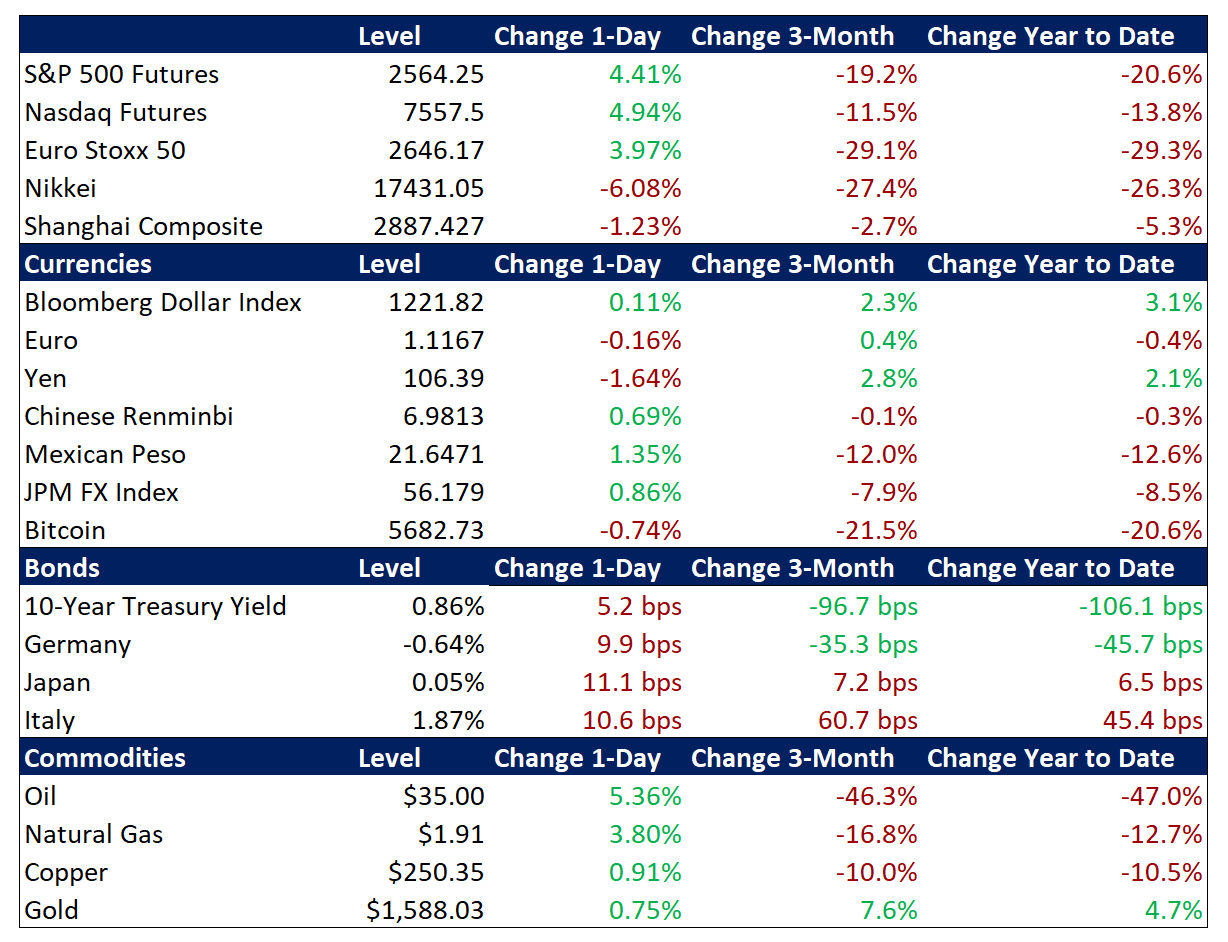 After market confidence was progressively undermined by this week’s lagging US efforts to marshal a significant fiscal response to counter the economic fallout from the pandemic, investors will be intently focused on the US spending bill expected to be finalized today. With fiscal support widely deemed to be the most effective means for governments to diminish the human and economic toll of the outbreak, a sizeable and strategic US emergency budget that is emblematic of bipartisan unity would be a key step toward stabilizing market sentiment. Lack of apparent progress and partisan bickering over government budgetary support to help address the growing economic impact of the pandemic has been a significant downside catalyst this week, alongside President Trump’s Wednesday address to the nation, which focused on travel restrictions from the EU rather than domestic economic support or progress on virus testing capabilities. Meanwhile, fiscal stimulus measures have been ramping up overseas this week. The UK unveiled a $39 billion spending package, Australia announced a $10-13 billion plan, and Italy upped its program to $28 billion, which includes tax credits to hard-hit companies as the EU provides fiscal leeway to the indebted country. Also, Japan is marshalling a $15.6 billion anti-virus budget and Germany’s central bank president Weidmann advocated deficit spending. Meanwhile, the governments of Spain, Italy, and South Korea took a step reminiscent of the global financial crisis and banned short-selling of certain equities.

Monetary accommodation is being deployed in an attempt to blunt the deepening economic impact of the coronavirus and address liquidity issues, but the European Central Bank (ECB) underwhelmed yesterday, putting additional pressure on the Fed to step up its stimulus. The adverse market reaction to central bank easing yesterday highlights the difficult situation for monetary policymakers who lack cover due to stalled fiscal efforts. The ECB did not cut rates as expected but augmented its extraordinary monetary support by creating a new concessionary loan facility for small businesses and upping the asset purchase program, though some analysts were unimpressed with the temporary nature of the increase as well as well as ECB President Lagarde’s remarks that suggested a less permissive stance toward stabilizing the sovereign market pressures in the EU. Italian bonds sold off sharply following the ECB decision but have stabilized this morning. Later in the day, the Fed announced that $1.5 trillion would be on offer to address liquidity strains in short-term funding markets, as well as indicating that its balance sheet expansion program would now include purchases beyond three months, although this was not explicitly labeled quantitative easing. While short-term funding markets were soothed, broader markets received only a temporary lift from the targeted action. Futures markets project at least 75 basis points (bps) of Fed rate cuts by next week’s meeting and market participants are broadly expecting the official restart of quantitative easing.

US Consumer Confidence in Focus – This morning, the March U. Michigan Consumer Sentiment index will be one of the earliest indicators of how the US economy is weathering the epidemic.