Global risk assets advanced overnight, reflecting investor relief over easing tensions between the US and Iran. S&P 500 futures indicate a 0.4% gain at the open, which would build on yesterday’s strong gain and put the index above last Thursday’s record high. Overnight, equities in Asia and the EU posted similarly robust upside as risk appetite was buoyed by the de-escalatory actions by the US and Iran. Correspondingly, demand for safe haven assets like Treasuries and gold has ebbed, although the latter is retaining much of its gains over the past week. Yields on 10-year Treasuries have popped to 1.87% but remain within their multi-month range between 1.45% and 1.95%, while the dollar is continuing to climb above recent multi-month lows ahead of key US economic data (more below). Oil prices have reversed sharply amid the easing geopolitical tensions, with Brent crude between $65 and $66 per barrel after spiking to nearly $72 during the initial reports of Iranian missile attacks on Tuesday night. 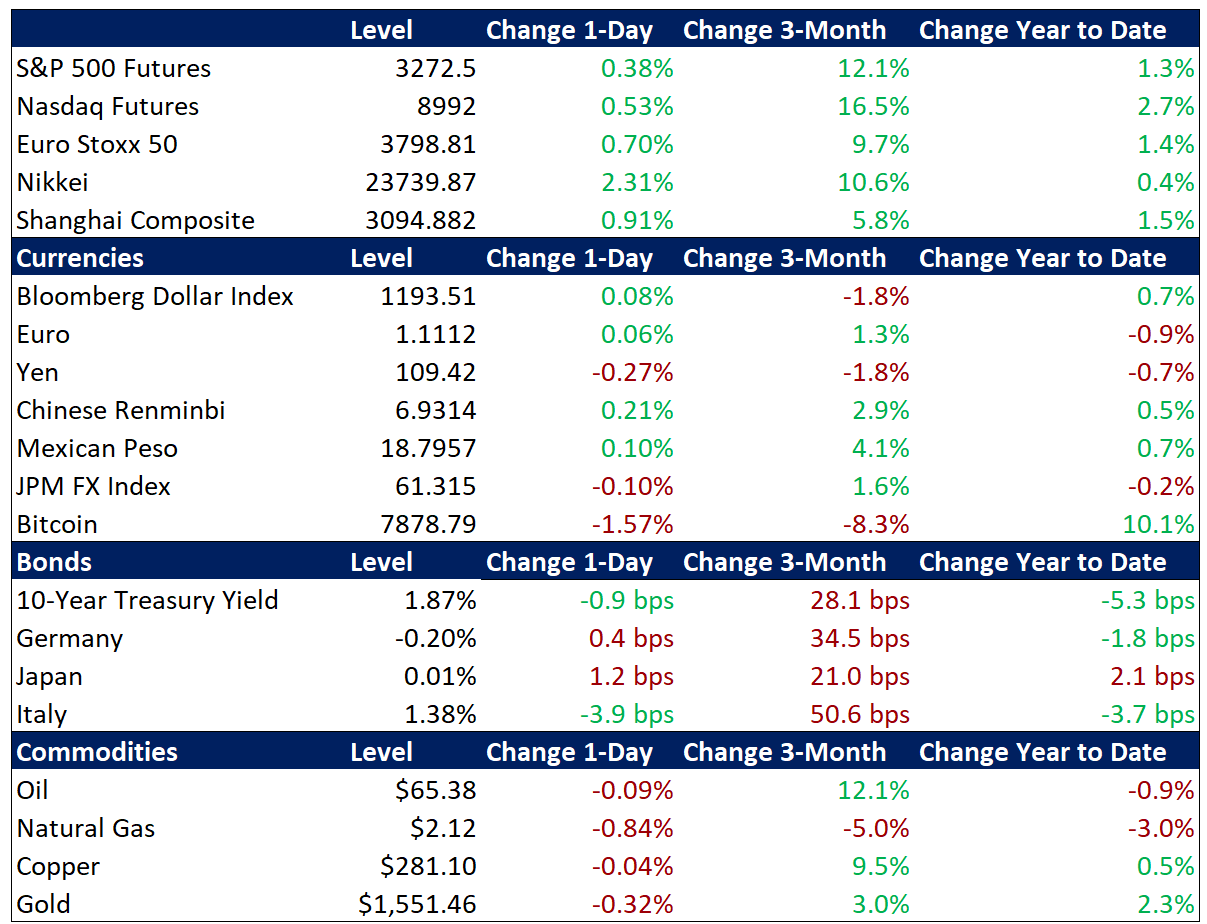 Global Stocks Rally as Washington and Tehran Step Back

After Iran’s reprisal attacks on US troops in Iraq on Tuesday evening resulted in no American casualties and were accompanied by balanced rhetoric on both sides, President Trump affirmed a cessation of hostilities yesterday, boosting investor sentiment. The past week’s events have induced moderate volatility across global markets but even at its peak, the degree of risk aversion was moderate relative to the scale of the geopolitical threat. Tuesday evening, global financial markets were roiled by reports of missile attacks on a number of Iraqi military installations housing US troops. Iran quickly took credit for the attacks, characterizing them specifically as a response to the US killing of Iranian General Soleimani late last week. S&P 500 futures were down nearly 2% and oil prices had spiked almost 5%, with Brent nearing $72 per barrel. Sentiment began to recover swiftly amid reports of no American casualties and Iran’s measured rhetoric regarding the attacks, which called them proportionate and promised no further action absent a US counterstrike. Later, President Trump tweeted “All is well” and Iraq’s Prime Minister stated that Iran provided advance warning of the strikes. Yesterday morning, President Trump stated that Iran was “standing down” and announced tighter sanctions but no new military action, thereby alleviating investor fears of all-out war. Among the safe haven asset classes that saw their demand spike in response to the heightened tensions, Treasuries, the yen, and oil have largely reverted to pre-strike levels, although gold prices are retaining a portion of their gains. The S&P 500 is set to vault to another record at the open. This investor equanimity in the face of still-elevated risks is supported by recent history, in which geostrategic flare-ups have mostly proven fleeting and immaterial to global financial markets.

Following yesterday’s disappointing reading of factory orders, Germany’s trade data relapsed to the downside this morning, as the euro nurses year-to-date losses. Data in Europe remains spotty as German exports and imports fell 2.3% month-on-month (m/m) and 0.5% m/m, respectively, in November, undershooting expectations of -0.9% and 0.1% as well as the prior month’s 1.5% and 0.5%. This comports with November’s weak German factory orders, which fell 1.3% m/m in November, well below estimates of a 0.3% rise. Meanwhile, the Euro area Business Climate Indicator fell by 0.04 points in December to -0.25, the lowest level since August 2013, and below market expectations of -0.16. This recent string of downbeat EU economic data has sent the euro 1.0% lower versus the dollar over the past week, with Friday’s US nonfarm payroll number potentially offering further support to the greenback in the event of an upside surprise, Yesterday, the ADP Employment Report showed that private businesses in the US added 202K workers in December, the most since April and well above expectations of 160K. The service sector added 173K jobs while the goods-producing sector added 29K jobs, as a 37K gain in construction jobs was enough to offset continued declines in manufacturing. Nonfarm Payrolls will be released on Friday and consensus estimates are for a 160K increase.

Fed Speakers on the Calendar – As analysts await Friday’s nonfarm payroll number, a bevy of Fed officials will weigh in on the economic outlook. Vice Chair Clarida, and regional Fed presidents Kashkari, Evans, Bullard, Williams, and Barkin will all deliver remarks today. Analysts expect little change in the prevailing “wait-and-see” policy posture, cautious optimism on US growth, and focus on soft inflation. Futures markets still reflect meaningful odds of another rate cut over the coming year but the Fed’s ongoing asset purchase program has taken some of the pressure off interest rate policy. A gauge of US financial conditions compiled by Goldman Sachs suggests that the monetary environment is near its loosest level in five years.

US-China Trade Deal in Sight – Chinese Vice Premier Liu has confirmed that he will be coming to Washington next week for a signing ceremony of the Phase One trade deal on January 15th.

Fed tightening in the face of recession and inflation fears is keeping markets volatile as crypto remains in turmoil. China remains in lockdown and under pressure while the war in Ukraine keeps pressure on energy and agriculture markets. https://marketspolicy.com/five-minute-macro-5-16-2022/

We made it to Friday! Celebrate by listening to this week's episode of the #Macrocast where @BDeAngelis82 joins Brendan and John @MarketsPolicy, to discuss the topics moving the market this week, including tech, crypto, and inflation numbers: https://spoti.fi/38naDdE

The FOMC meeting later this week is the main focus of markets this week while earnings season continues. Friday brings the jobs report while Russia and China remain risks to markets.
https://marketspolicy.com/five-minute-macro-5-2-2022/