Global risk asset prices reversed lower overnight as Chinese officials significantly raised their official infection totals for the coronavirus outbreak. S&P 500 futures point to a 0.7% loss at the open, which would bring the index below yesterday’s new record high. Investor optimism over apparently slowing infection rates and renewed production and other economic activity in China had helped spur US and global equities higher over the past week, but China’s revised figures have reintroduced a degree of concern. Overnight, equities in Asia and the EU also retreated. The renewed risk aversion is rallying safe-haven Treasuries, with yields turning back toward recent lows and the 10-year yield at 1.59%. The dollar, however, is holding steady against its peers. Crude oil prices are also relapsing, with Brent crude falling back toward $55. 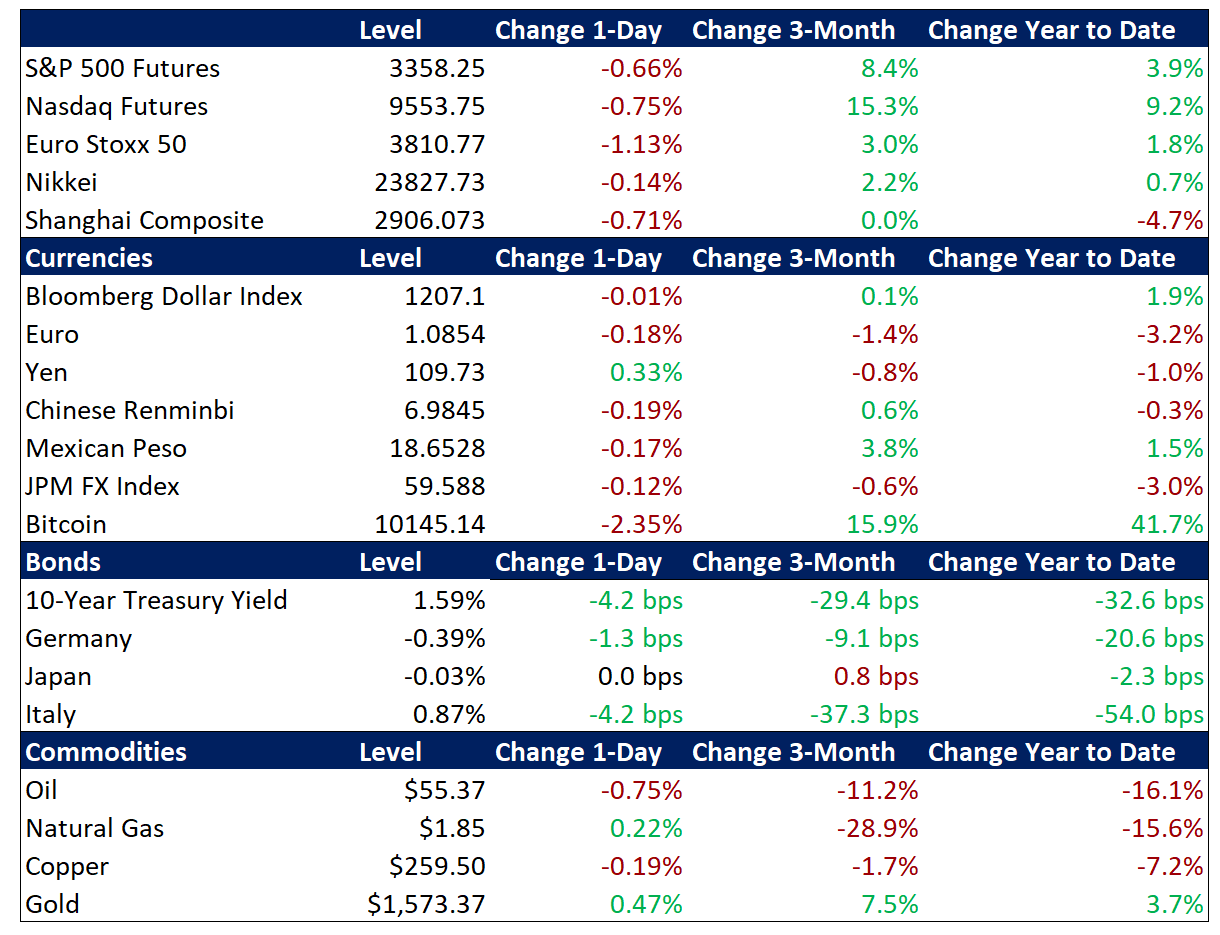 Investor sentiment turned more cautious overnight as China’s new classification methodology resulted in a dramatic upward revision in confirmed cases of the virus (now named Covid-19). Last evening, Chinese authorities announced that the official number of cases of Covid-19 in Hubei province had increased by nearly 15,000 due to new diagnosis guidelines. Specifically, the World Health Organization indicates that Chinese officials have widened the definition of a confirmed case to include clinically diagnosed patients, whereas only lab-confirmed cases had been tallied in the past. Investors are not only concerned by the jump in contagion figures but also the correspondingly diminished credibility of official data. Now, total infections are reported to be 60,349 while fatalities have reached 1,369. Also, IT component maker Foxconn refuted news about its resumption of production. For context, investors had been encouraged by reports earlier this week that Foxconn, which has over one million employees in China, is incrementally restarting a number of its previously closed mainland facilities and expects to reach 50% of production capacity by month-end. The Shanghai Composite broke a streak of seven straight sessions of gains, falling 0.7% to increase post-Lunar New Year losses to 2.4%, with year-to-date downside of 4.7%. The renminbi dipped versus the dollar overnight, retreating from its strongest level of the month.

In yesterday’s second half of the semiannual Humphrey-Hawkins testimony in front of Congress, Chair Powell maintained an optimistic outlook on the US economy, acknowledged the potential for a global slowdown due to the outbreak in China, and focused on the Fed’s approach to accommodation in a low rate environment. Echoing his remarks from Wednesday’s first round of testimony, Chair Powell highlighted the potential for a global spillover from Chinese economic disruption related to the outbreak but maintained an optimistic outlook on the US domestic front. Otherwise, analysts focused on Chair Powell’s statements on potential easing options given the limited scope for interest rate cuts from current already-low levels. Specifically, he noted that the Fed would “aggressively” pursue large-scale asset purchases (or quantitative easing, aka QE) in case of an economic downturn given “less room to cut.” He also characterized low interest rates as “not really a choice anymore, they are a fact of reality” that requires the Fed to search for “every scrap of policy space… to be able to support the economy.” For context, futures markets reflect around 50% odds that the Fed will restart rate cuts by the July meeting, and one full 25 basis point rate cut is being priced in before March 2021. Additionally, President Trump’s Fed Board candidates, Judy Shelton and Christopher Waller, will appear before the Senate Banking Committee today.

US Inflation Figures Due – Analysts are awaiting US Consumer Price Index (CPI) inflation data for January this morning, with expectations for a continued trend of relatively subdued pressures. For context, December CPI climbed to 2.3% year-on-year (y/y) from 2.1% in November. This was the highest rate since October 2018, boosted by a sharp rebound in energy costs, while food inflation eased to 1.8% from 2.0%. January’s reading is projected to edge higher to 2.4% y/y. Core CPI, which excludes the more volatile components of food and energy, was unchanged at 2.3% y/y last month and is expected to dip to 2.2%. These tame numbers are not expected to elicit a meaningful market reaction or alter the outlook for Fed policy.

IEA Cuts Oil Demand Estimate – The International Energy Agency has slashed its oil demand figures for the first quarter (1Q) of this year owing to the impact of Covid-19 epidemic. Specifically, the IEA is now calling for oil demand to contract by 435k barrels per day in 1Q, with a less severe downgrade for 2Q, and an upward revision for its 3Q demand estimate due to an assumed snapback in activity as the outbreak ebbs. This comes a day after OPEC published figures reflecting a 440k barrels per day decline in oil demand this quarter due to the impact of the coronavirus. Crude prices are stabilizing above their lowest level in over a year.